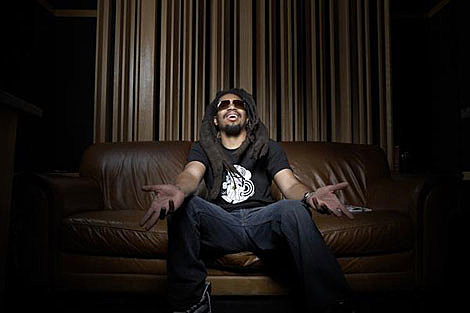 Mr Lif returns! The now former Def Jux representative has inked a NYC show in his calendar, Nov 4th at the Knitting Factory, with P.Casso & the A-OK Collective plus Breezy Brewin' (of indie hip hop heroes The Juggaknots). Tickets are on sale.

Mr Lif dropped Mo Mega on Def Jux in 2006, but 2009 will see the release of his new record I Heard It Today on his OWN label Bloodbot Tactical Enterprises. Due on Inauguration Day (January 20th), Lif will drop "1-2 songs every three weeks until Election Day" and one song following the election with his "post-electoral thoughts". All the songs will be collected and released with bonus unreleased material as I Heard It Today. J-Zone, Edan, and Illmind have all contributed production to I Heard It Today (you'll only be able to catch Edan perform this weekend at ATP with special guest Dagha).

Mr Lif has been commenting on the news via a series of free tracks he calls "Presidential Reports" (first two available for download above). Lif is also videoblogging on his "I Heard It Today News Network".

The Knitting Factory show will be hosted by John Robinson and WKCR's own DJ Sucio Smash, who can be found every friday from 1-5AM on 89.9 (aka 89 Tek 9) hosting Squeeze Radio (podcast here) with Timm See, spinning the latest in indie hip hop. The 1-5AM friday shift has long been a revered place on WKCR, most notably held by the now legendary The Stretch Armstrong and Bobbito Show in the mid-nineties. Stretch Armstrong & Bobbito's show, which was named by the Source Magazine (before that whole Benzino nonsense) as "the best hip hop show of all time", also centered around indie hip hop and featured freestyles by then up and coming artists like Biggie Smalls (before he changed his name to The Notorious B.I.G.), Big L, Cam'ron & Ma$e (then known as Killa Cam & Murda Mase), Wu-Tang Clan, and sooooo many more. Stretch has posted some of those legendary freestyles for download over at his blog.