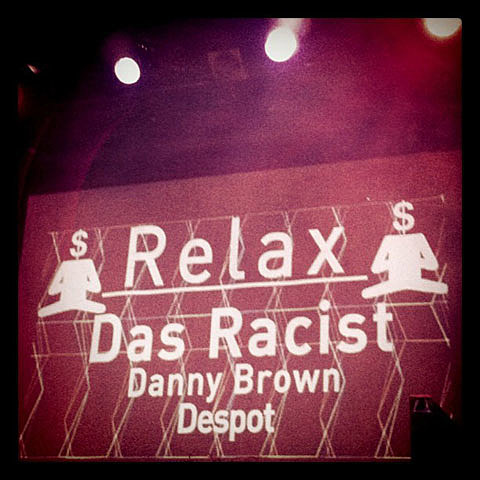 Das Racist recently hosted a party at Santos with ASAP Rocky and Spaceghostpurrp. The party was a few days before their record release show for 'Relax' at Bowery Ballroom with Despot last night (9/12).

Danny Brown, who appears on the album and was initially scheduled to play the Bowery show, cancelled at the last minute and was replaced with Mr Muthafuckin eXquire who just released a free album via Mishka (the label) which you can download at bandcamp. Complex also recently filmed a video of Mr. Muthafuckin eXquire at Mishka (the store) in Brooklyn. You can watch that below.

Das Racist also just dropped an uncensored video today for "Michael Jackson" which you can watch, along with some videos from the Santos show below. Listen to "Relax" on Spotify if you have it.

Missed the Bowery show and can't wait for the end-of-tour Brooklyn show to see Das Racist again. Well, you can see them at S.O.B.'s on Thursday (9/15) for the "Hot97 Who's Next Back 2 School Drinkfest Prep", THOUGH NOTE: we have no idea what Das Racist are doing at this event - performing, DJing, just standing there, hosting, who knows.... But the fest includes an album listening session for Relax, beer pong and flip cup tournaments, and performances by Maffew Ragazino Kassa Overall. Tickets are on sale now. The flier is below. Tickets for the 11/16 MHOW show go on sale Friday (9/16) at noon.

In related news, Philadelphia rapper Lushlife is working on a new mixtape which will be out this October. The tape features Heems (of Das Racist), Andrew Cedermark, Dice Raw, Cities Aviv, STS, Jabee, Sun Glitters, and others. You can grab the track, "Back On My Slang" above.

Video, flier, and updated dates below...