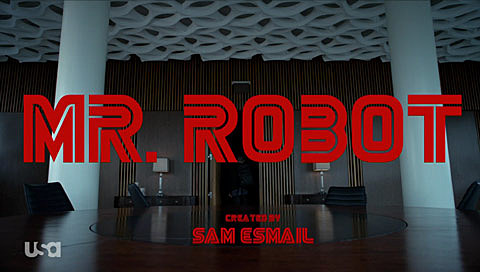 One of the most (deservedly) talked-about shows of the summer was drama Mr. Robot which just wrapped up its excellent first season last night. If you haven't seen it, I've described it as Fight Club meets American Psycho, but about computer hackers. (Specifically, one hacker, named Eliot, played with perfect spacey detachment by Rami Malek.) That is very, very reductive (the show is about a lot of things, you come to learn) but that gets you there. The whole season is now available on USA on-demand. Music is treated just as expertly as everything else in this show, including some some familiar songs and cool, more obscure choices. MAJOR spoilers lie below, so read at your own caution.

One of the interesting things about Mr. Robot is the show knows you know its influences. The Fight Club parallels were fully acknowledged in the first season's penultimate episode. While Elliot is showing Tyrell fsociety headquarters, not long after it's finally revealed that Mr. Robot (Christian Slater) is in fact in Elliot's head, a solo piano version of the Pixies' "Where is My Mind," performed by Maxence Cyrin, scores the scene. The original was so memorably used in Fight Club's final scene, and that was a very clever tip-of-the-hat. Listen to the piano version above.

A more controversial music placement was the use of FKA Twigs' "Two Weeks" during Tyrell's sex-turns-to-murder of his rival's wife. On a lighter note, a montage where Eliot imagines a happy life outside of fsociety is set to LEN's 1999 hit "Steal My Sunshine" and last night's season finale used Time Zone's "World Destruction" to great effect in an appropriately anarchistic montage. Perfume Genius' "Queen" also has a notable scene, as do the Alabama Shakes whose "Sound & Color" is used to close out the final episode.

A few other nice choices: Lee Hazlewood & Nancy Sinatra's "Some Velvet Morning" scores the opening credits to Episode 6. (How well done are Mr. Robot's opening credit sequences, by the way?) And Tangerine Dream's "Love On a Real Train" (from Risky Business) scored that same episode's closing scenes. Other artists used in episodes include M83, Schoolboy Q, MSTRKRFT, Most Def, and Animotion.

Music is also a big part of Elliot's life (or non life), in that he assigns classic album names to burned CDs which actually contain data about people he hacked, some very special to him, like next door neighbor (and love interest) Shayla who gets assigned The Cure's Disintigration. "Pictures of You" from that album also scores a related scene. Vulture points out that "the song is particularly crucial for its composition: a fire destroyed lead singer Robert Smith's home, and as he was searching the rubble, he found a picture of his wife in the ashes. It's a hat tip to the destruction that would soon level the lives of Shayla and Elliot, and the need to carry on in spite of the damage."

Mr. Robot is also a show worth watching through a second time, which may tide you over a little during the year wait for Season 2.