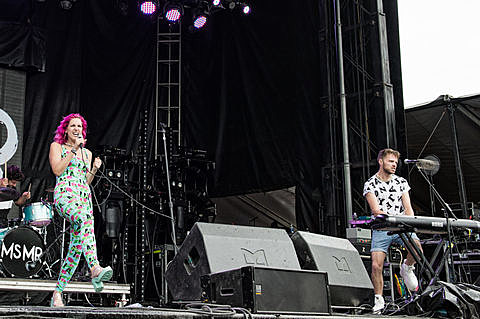 Glam pop duo MS MR (Lizzy Plapinger and Max Hershenow) announced their American/European fall tour dates today, following last week's announcement of the release date of their sophomore album. How Does It Feel is out 7/17 on Columbia. MS MR will be touring with various openers, including a leg with Jack Garratt and VÉRITÉ, which is the one that comes to NYC.

The NYC show happens October 8 at Terminal 5. Tickets for that show go on AmEx presale Wednesday (6/3) at noon and the general on-sale starts Friday (6/5) at noon. They also have a free show not far from NYC before that tour at The Surf Lodge (8/29) in Montauk. All dates are listed below.

During the entirety of the tour, a some of the proceeds will be donated to the Third Wave Fund, about which Lizzy and Max say:

We're thrilled to be able to contribute a portion of ticket sales from the How Does It Feel Tour to Third Wave Fund, a grassroots fund that supports feminist, queer and trans-rights organizations. A deep-seated belief in equality, self determination and equal opportunity is at the root of our ethos as a band, and we feel we have a responsibility to bring attention to organizations that work towards those causes. Please read up on the important work TWF is doing in communities around the country and get involved.

The new video for the album's lead single, "Painted," is a Stanley Kubrick-informed homage to the 1978 documentary, The Secret Life of Plants. It's equal parts verdant, creepy and cool.

Watch that, with their tour trailer and the list of tour dates, below...