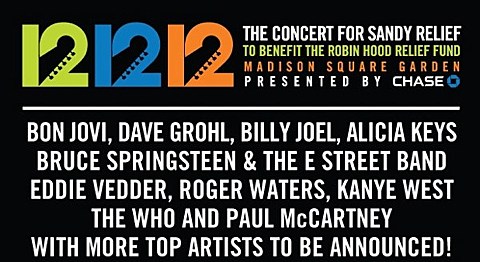 "Shameless scalpers are making big bucks by marking up tickets to a star-studded benefit concert for victims of Hurricane Sandy.

Tickets for the "12-12-12 Concert for Sandy Relief" at Madison Square Garden -- with face values between $150 and $2,500 -- are being resold online for as much as $60,000.
"The scalpers should get their asses handed to them! They should be publicly shamed," said Bill Hind, 44, of Brooklyn, who has volunteered at hard-hit New Dorp Beach, Staten Island, for weeks. "How dare you make money off someone else's misery?"

Michael Sullivan, whose family was displaced from Breezy Point by the storm, was equally disgusted -- yet not surprised the scalpers would try to turn a profit on the backs of Sandy survivors.

"They would sell tickets to their mother's funeral if they could get a deal," Sullivan, 51, said.

"I find it appalling that scalpers are trying to profit off this charitable concert," Schumer wrote to StubHub and TicketLiquidator." [Daily News]