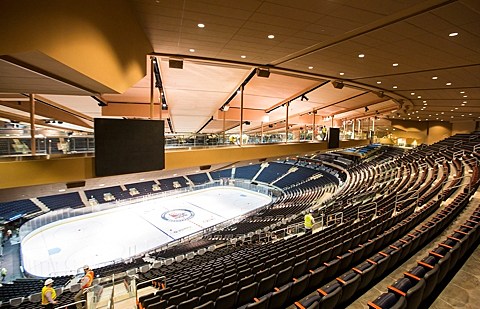 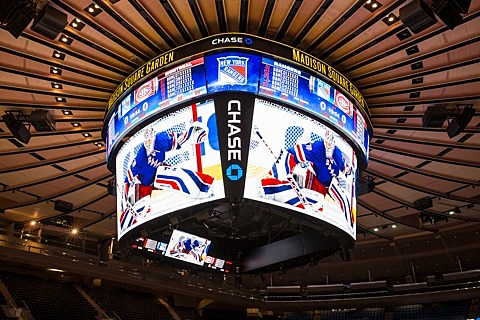 Madison Square Garden has been undergoing some renovations recently (which is at least one reason Barclays Center has been getting so many good shows), and they've started debuting pictures of their work. The most recent one is the new LED video display system:

Madison Square Garden unveiled [Monday, 10/21] the design for the Arena's new state-of-the-art, one-of-a-kind, center-hung multi-media display. The display will serve as the centerpiece of The Garden's brand-new LED video display system, known as GardenVision, which will debut on October 25 as part of the third and final phase of The Garden's unprecedented, $1 billion, three-year Transformation. This cutting-edge system will include more than 20 individually produced LED displays, providing fans with an enhanced visual experience while at The World's Most Famous Arena.

"With the completion of our historic Madison Square Garden Transformation, The World's Most Famous Arena has also now become the world's most state-of-the-art arena, ensuring that we continue our tradition of providing our fans with the very best experience possible when they attend an event at The Garden," said Hank Ratner, president and chief executive officer, The Madison Square Garden Company. "Among the many new technological advancements in the Arena is our new one-of-a-kind GardenVision system, featuring the industry's most dynamic multi-media display with a unique circular design and stunning image clarity, guaranteeing fans all around the Arena will get to experience the magic and excitement of The Garden up-close and in high-definition."

This comes a week after they just finished up the new Chase Bridges:

Madison Square Garden[Monday, 10/14] unveiled new construction photos of the Chase Bridges, which will debut later this month as part of the third and final phase of the unprecedented $1 billion, top-to-bottom Arena Transformation project. The two first-of-their-kind Chase Bridges will offer a premium experience for fans with one of the most unique seats in any sports arena.

In a nod to New York City's many renowned suspension bridges, the Chase Bridges are suspended from The Garden's iconic ceiling by 24 (north bridge) and 26 (south bridge) steel tube hangers. First-class food and beverage options are steps away from the seats, including MSG Signature Collection offerings from top New York chefs and restaurateurs. The Chase Bridges include colors, design elements and curving forms that compliment and seamlessly integrate with the distinctive interior architecture of The Garden's bowl. Each bridge is 233 feet long and 22 feet wide, and together they weigh a total of 662 tons. The two bridges combined will seat 430 fans for New York Knicks and New York Rangers games; a limited number of individual tickets are still available via NYKnicks.com and NYRangers.com. Seating on the bridges will also be available for select concerts and other events at The Garden, depending upon event set-up.

A couple of the pictures are above. A couple more are below.

Upcoming shows at the fixed up venue include Kanye West, Phish, Justin Timberlake, Elton John, Paramore with Metric, and more. 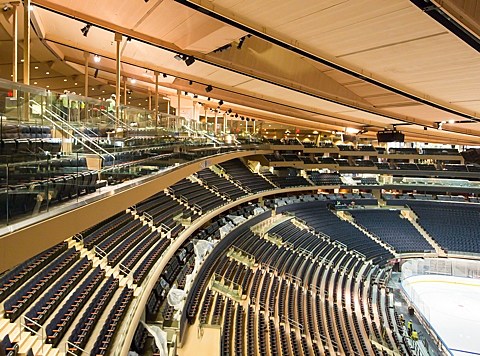 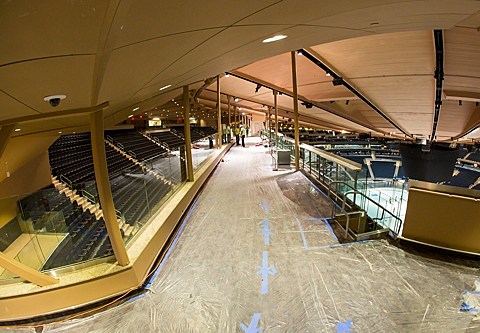