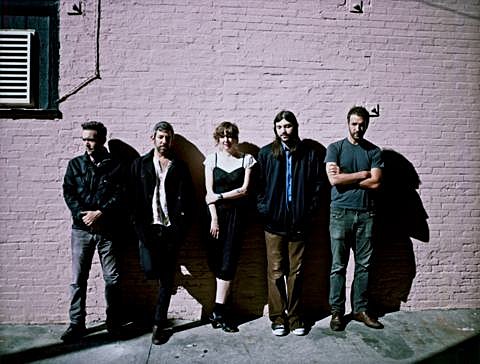 Mt. Royal is a relatively new group, having formed in Baltimore last year. But you may know the parts. Three of the members used to be Big in Japan, and singer Katrina Ford spent most of the '00s fronting the intense The Celebration. Mt. Royal are definitely poppier than The Celebration ever were, but in a Blonde Redhead or Flaming Lips kind of way. I caught them by accident at Pianos back in September and was really impressed. The band doesn't have any tour dates at the moment, but keep an eye out.

The band are gearing up to release their debut EP, which will be out January 28 via Bella Union/PIAS. We've got the premiere of the video for lead single "Missing Reward" which is seemingly simple in concept -- mainly Ford singing superimposed with a discoball -- but there was serious thought behind it. Says the band

The idea for creating the video for Missing Reward was to have a video which connected the viewer directly with Katrina. In the earliest days of music television videos often had less cuts and more focus on the performers themselves. In this manner the video set was created so that most of the "effects" and atmosphere of the video were captured during the actual filming itself. There's always the temptation to turn a video into a massive art project which can be very fulfilling but this song has such a strong, emotional delivery that it seemed the best approach was to let people see and feel exactly where that delivery is coming from. It was also a conscious decision to not force any shots where the other band members were present just for the sake of including them. To create an other worldy, beautiful aesthetic we knew we could call upon our friend Laura Germida to direct and create the environment for Katrina to perform. She recruited John Mcgarity for the camera work and Tiffany Mcgarity to produce while our friend Mike Storey helped as assistant director. It was a modest set up but that was exactly what we were going for and Ryan Barger was able to get an edit we were happy with in two passes so we really lucked out.

You can watch the video below...