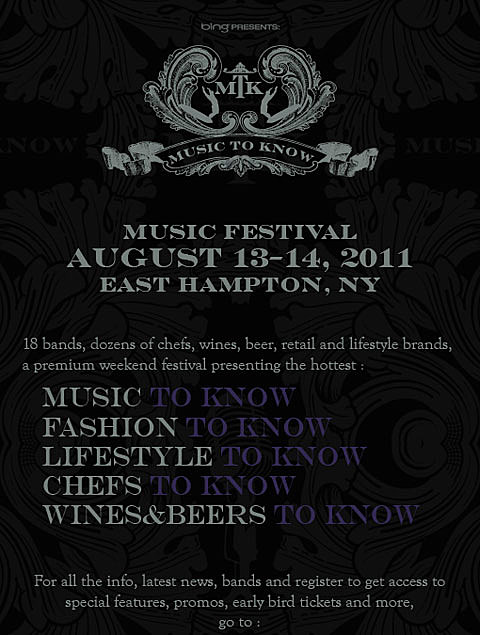 According to "Music to Know"'s website, there will be "18 bands, dozens of chefs, wines, beer, retail and lifestyle brands, a premium weekend festival presenting the hottest music, fashion, lifestyle, chefs, and wines and beers to know." It also says "website under construction. stay tuned." I can't wait to know the full lineup of the August 13-15 East Hampton fest which...

"...had been planned for Amagansett, received approval for the East Hampton Airport property usage on Thursday, though they have one more hurdle to cross: an okay from the Federal Aviation Administration.

Sag Harbor residents Collage and Chris Jones, owner of the Sole East, has permission for bands and a DJ to play between noon and 10 p.m. The permit is for a total of 9,500 people over both days..."

...says the East Hampton Patch who also reveals that Dawes are confirmed on the bill so far.

MTK is not to be confused with the just-announced August 5-7 Southampton fest called Escape to New York.