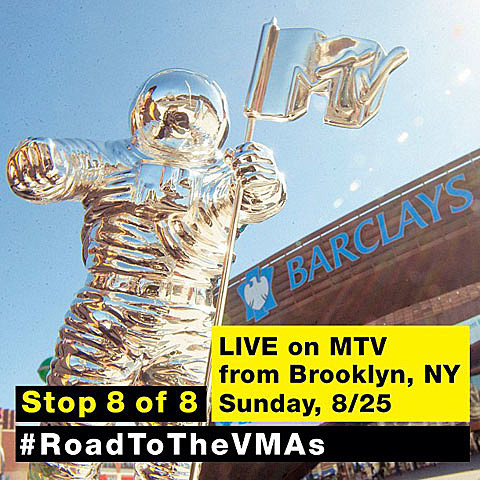 MTV, a unit of Viacom Inc. (NASDAQ: VIAB, VIA), is set to make history by bringing the 2013 "Video Music Awards" to Brooklyn, New York for the first time ever. Airing LIVE from Barclays Center on Sunday, August 25, this year's "Video Music Awards" will mark the 30th anniversary of the show and become the first major annual award show to take place in the borough of Brooklyn.

"From a vibrant musical scene for up and coming artists to epic concerts by today's biggest stars and the triumphant return of pro sports to the borough after nearly 60 years, Brooklyn has re-emerged as a cultural capitol where music, sports and entertainment history is made every day," said Stephen Friedman, President of MTV. "We can't wait to help write the next chapter on August 25th, when one of the biggest nights in music happens in Brooklyn... for the very first time."

"Brooklyn is home to icons like the Cyclone in Coney Island and the Brooklyn Bridge, and now it can lay claim to the MTV 'Video Music Awards,'" said Mayor Michael R. Bloomberg. "Bringing the VMAs to Brooklyn will mean hundreds of jobs as crews work on the production and provide a boost to our local economy as attendees stay in hotels, visit local eateries and experience all Brooklyn and our City have to offer."

"MTV's 'Video Music Awards' are the perfect culmination to an incredible inaugural year for Barclays Center," said Brett Yormark, CEO of Barclays Center. "The VMAs are a symbol of pop culture and have created iconic moments worldwide in music and entertainment. Brooklyn has become an international brand and is the perfect setting for these moments. We can't wait to share our stage with the world."

"From hip-hop to hipsters, JAY Z to MGMT, Brooklyn musicians have a long history of dominating the 'spotlight' on MTV. Brooklyn is a cultural Mecca--the hippest, coolest place for young people across the country, and has played a crucial role in the careers of some of 2013's biggest bands, like Fun and the Lumineers," stated Brooklyn Borough President Marty Markowitz. "Now, it is only fitting that the first time Brooklyn will ever host a major awards show, we are welcoming the most exciting and talked about spectacle in the music industry: the 'MTV Video Music Awards.' What better venue than the newest, most beautiful, most state-of-the-art arena in the country, Barclays Center. Bravo to MTV on a decision that hits all the right notes and strikes all the right chords. I'm so thrilled that I'll probably get 'no sleep till Brooklyn' hosts the VMAs!"

Thoughts? Meanwhile the circus is happening at the new Brooklyn arena which will also host upcoming shows with Green Day, Best Coast, The National/Youth Lagoon, The Postal Service, Beyonce, Rodriguez, and more.