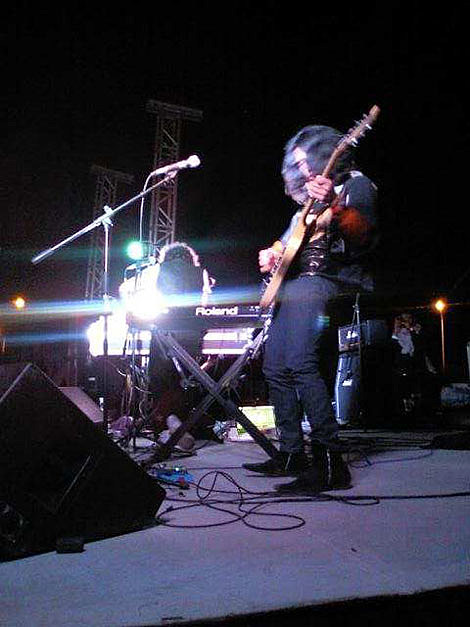 The experiment that was the first MtyMx Festival is over. The last day of Todd P's Mexican festival (3/22) featured 14 acts, half of which were from Mexico. Liars, HEALTH, and Neon Indian all made it for their headlining sets (the acts that were flown in had very few problems for the most part). The rest of the last day's lineup included Ratas del Vaticano (Mexico), Indian Jewelry, Lemonade, BamBam (Mexico), Jóvenes y Sexys (Venezuela), Mockinpott (Mexico), Best Fwends, High Places, Alexico (Mexico), Mentira Mentira (Mexico) and Sr. Amable & Mr. Racoon (Mexico). The Monday after-fest show that was held at Yo Garage for all three nights featured sets by Coasting, noisepunks XYX, and Mentira Mentira (again).

Bands that didn't make it for their Monday sets for one reason or another included No Age, Thee Oh Sees (they tried to get past the border at least twice), Liturgy, The Sandwitches, Javelin, Salem, DD/MM/YYY, Fergus and Geronimo, Big Troubles, Pictureplane, Gauntlet Hair, Tearist, Josephine and the Mousepeople, and Baths. Remember that was just day three. It was a similar situation each day, but I never planned on being there for the first day (SXSW), and I got there much later than expected on the second. As I write/dictate this, I'm currently waiting for a noon (note: it's two hours earlier here than it is in NY) Greyhound bus out of Monterrey that's going back to Austin (an approximately 8 hour trip that took about 11 hours of driving and 8 hours of waiting on the way in). There were two 1am Todd P buses that left last night directly after Liars, but our stuff (and a bed) was in our hotel room.

[note: Andrew is now on the bus]

How to get home seemed to be the main focus on everyone's mind early on the last day. Once that was all figured out, things turned more optimistic and Todd P even made announcements referencing next year.

Dan Deacon was a constant presence at the festival. He actually replaced Thee Oh Sees on the last day as "Dan Deacon & friends", a short comedy set. Another group that performed for multiple days was Das Racist who treated late Sunday night arrivals to an energetic set at the after-party.

Though I only spent 36 hours total in Monterrey and saw fewer bands than I caught Thursday afternoon in Austin, I made lots of new friends, saw some great sets, and it was an experience that won't soon be forgotten. Safety was a big question, but though the festival had issues (including theft on the festival grounds, and at least one mugging), people actually getting hurt wasn't one of them.