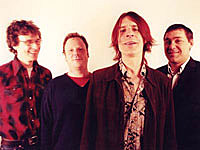 Mudhoney played 'Superfuzz Big Muff plus Early Singles' from start to finish in LA a few days ago. The Melvins played 'Houdini' on the same bill - must have been pretty nice - Flipper played the show too.

New York gets the chance to hear Mudhoney do the same thing later this year. Tickets are now on sale for a December 1st show at the Music Hall of Williamsburg, and one the next day at Bowery Ballroom. UPDATE: They are only playing the album in its entirety at Bowery. No Flipper or Melvins on those bills though - Melvins have their own 2 NYC shows in October.