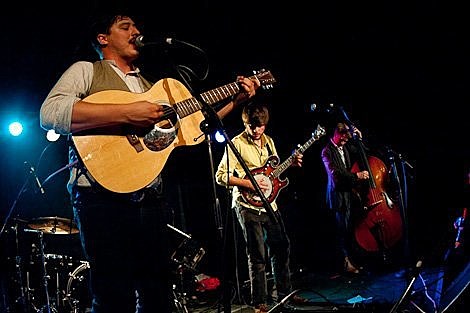 We've already knew that a third Arcade Fire album is due in 2010 but we can now reveal the band have been working on it with Markus Dravs, who engineered their last offering Neon Bible.

Not only does Dravs have the likes of Bjork, Coldplay and The Maccabees on his studio CV, he produced Mumford and Sons' debut Sigh No More, with Marcus Mumford letting slip the news in an interview with 6 Music.

"I don't know if I'm allowed to say this but yeah, he's working on the next Arcade Fire record at the moment," he said, with double bassist Ted Dwane interjecting: "Boom there it is."

"There it is, dropped, 6 Music exclusive," added Mumford. "I'm sure that's public knowledge, because he's been there for about six months."

UK folkies Mumford & Sons will be returning to the US, post-their CMJ appearances, for at least one show on Thursday, February 18th at Bowery Ballroom. Tickets go on AmEx presale today at noon. General sale starts Friday, December 4th at noon. There's also a Toronto gig planned a few days before, so probably many more dates to come. In the meantime they have announced dates in the UK, Australia and elsewhere through March. All dates below.

Mumford & Sons' tightly-packed vocal harmonies, bluegrass proclivities and neatly groomed facial hair are all in full display in their new video for "Winter Winds," off their debut, Sigh No More, which came out in October. That and a few other videos and all tour dates are below...