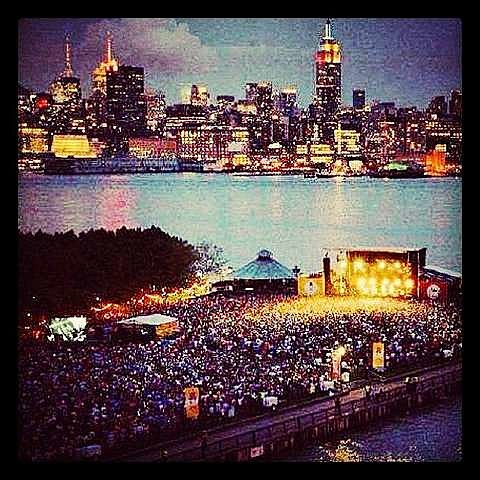 Mumford & Sons kicked off a monthlong American tour on Wednesday night with an outdoor concert in Hoboken, N.J., providing thrills for more than 15,000 people who crowded into Pier A Park to hear these English folk rockers.

It was the first time a major rock concert had been held in the park, which was built on an old pier near the Path Station and has views of the Manhattan skyline, city officials said. The skyscrapers across the river were bathed in rosy light and a rainbow appeared in the stormy sky just before the band took the stage and launched into "Lover's Eyes," an anthemic song off their long-anticipated second studio album, "Babel," (Glassnote) which is scheduled to be released next month.

"We are very, very happy to be playing our first ever gig in New Jersey," the band's lead singer, Marcus Mumford, said when the cheering for the opening number had died down. "That was quite a sunset." [NY Times}

15,000 people! If there was any doubt, Mumford & Sons are officially huge now. Weird to think they played Cameo just three years ago. The band are playing unconventional venues (and smaller cities) this whole tour (with opener Dawes), it seems to be working out ok for them. Mumford's next stop is Portland, ME on Saturday (8/4).

Also last night, at Williamsburg's Glasslands was Canadian artist Cold Specks whose album is one of this year's Polaris Prize shortlist nominees. If you missed them, Cold Specks were just announced as one of two special guests at tonight's monthly Communion party (8/2) at Union Hall (the series recently relocated from Public Assembly).

As you may know, the Communion is partly run by Mumford & Sons' Ben Lovett. The second special guest at tonight's show -- which is sold out, by the way (maybe there will be tickets at the door) -- is being kept a mystery. And while you could make guesses on who that might be, we can say that Mumford is definitely NOT it. (And no, we are not "protesting too much.") So don't start freaking out, Mumford fans. Or if you already had started freaking out, you can stop.