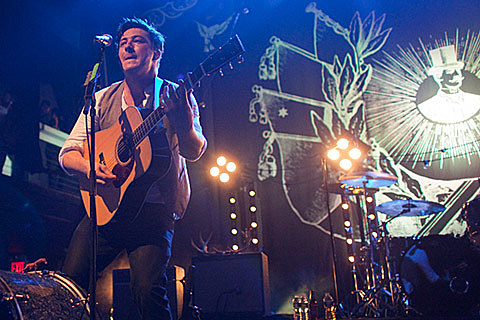 Mumford & Sons are set to kick off a tour of the US this August with Dawes surrounding their previously announced mini music festivals. That tour kicks off with a NYC area show at Hoboken's Pier A on August 1. Tickets for that show go on sale Thursday (6/28) at noon. All tour dates are listed below.

Mumford & Sons recently revealed in an interview with 3FM that they'll be releasing the followup to their 2009 debut this year, and it's due out on September 24. You can watch a video of that interview below, along with a video of the band performing a new song called "Where Are You Now" for a 3FM session.

As mentioned, The Very Best are playing three of the four mini festivals that Mumford & Sons are doing in the US. The Very Best just revealed a new song from their upcoming album, MTMTMK (out 7/17 via Moshi Moshi), called "We OK." It features K'Naan and you can stream it below. The Very Best will be in NYC to play Irving Plaza on August 13 with Seye, who also appears on The Very Best's song, "Kondaine," which you can watch the video for below. Tickets for the Irving show are still available.

A list of all dates, videos, and streams below...