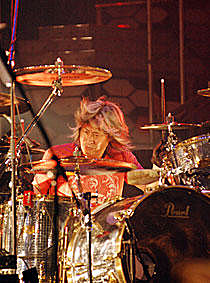 Munetaka Higuchi, the drummer and co-founder of the Japanese heavy metal band Loudness, passed away on Sunday [November 30th] at about 10:00 a.m. in a hospital in Osaka, Japan. He was 49. Akira Takasaki, the guitarist who met Higuchi during high school before forming Loudness, announced the news on his personal website on the same day. The official website for Loudness had announced in April that Higuchi had been diagnosed with liver cancer, and later reported in September that Higuchi went through two rounds of chemotherapy. Higuchi left a message on the website on October 16 that acknowledged that his condition had gotten worse, despite an operation to remove half of his liver. [Anime News Network]

Drummers Jimmy Carl Black and Mitch Mitchell also passed away in November. Not as much attention was given to the less lengendary drummer of Loudness, who, according to VH1 Classic, were just one hit wonders (here in the U.S. at least). I was watching the show "One Hit Wonders: Metal" on Sunday. They played videos by Faith No More, Kix, Twisted Sister, and Quiet Riot. And they played "Crazy Night" by Loudness which inspired me to look at Loudness's Wikipedia page which is where I read the sad news.