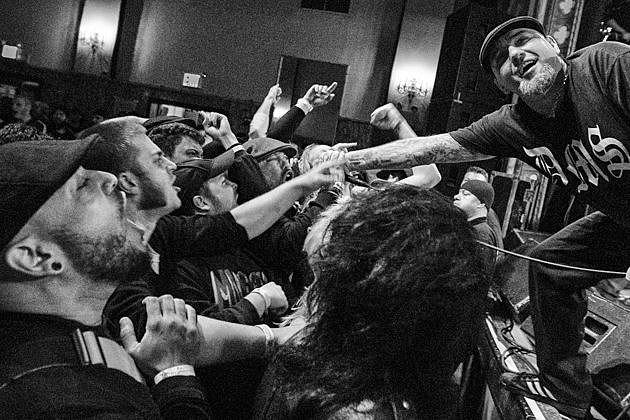 Murphy's Law frontman Jimmy Gestapo turns 50 this year, and he and the band are celebrating with a hometown show on August 12 at Bowery Electric with Drunken Rampage, Caught In A Trap and Agitator. Happy birthday Jimmy! Tickets are on sale now.

Murphy's Law's only other upcoming show at the moment is opening for Nuclear Assault and Whiplash on September 12 at Gramercy Theatre (tickets). That show is part of Nuclear Assault's "final tour" but they just got announced for Maryland Deathfest 2016 today -- along with a ton of other great bands (Testament, Discharge, Repulsion, Ringworm, Tragedy, and more) -- so it looks like that tour is at least extending until May 2016.

The Agitator are the Bowery Electric show is the one from NYC, not to be confused with the one from Philly whose final show is at This Is Hardcore, which begins on Thursday (7/23). The NYC Agitator also opens for another veteran band, Government Issue, when they play Brooklyn's Acheron this Saturday (7/18). Tickets are still available.

Speaking of This Is Hardcore, the lineup also includes Detroit's Build and Destroy, who are streaming a new EP today. They have members of RZL DZL, Violent Minds and Cold World, and the EP features Ben Cook of No Warning/Fucked Up/Young Guv and Scott Vogel of Terror. (They're both on the song "All Hail The Dopeman".) The EP, titled Map of the Heavens, comes out physically next week via Lockin Out, but you can stream it now below (via Noisey).