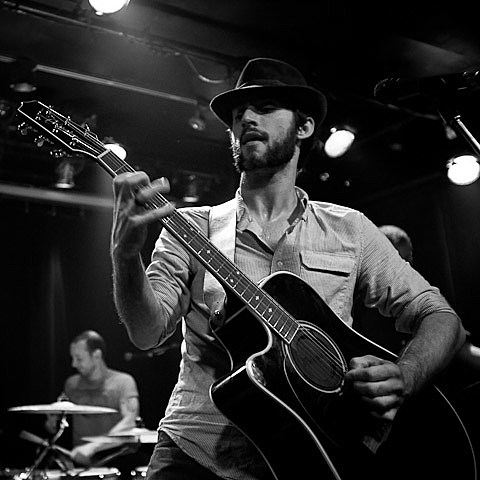 Murder by Death aren't on tour right now, but they are opening for the Hold Steady at Terminal 5 tonight (4/8) (tickets still available), and have some other random upcoming shows including a May 20th Rocks Off Concert Cruise, and a May 21st appearance at the Crowne Plaza Hotel in Somerset, NJ. That's how the band lists it, though a bit of research reveals that the NJ show is actually part of the Steampunk World's Fair which is happening at that location from May 20th - May 22nd.

All MbD dates, and details on an art contest for an upcoming 7", below...

If you're an artist and would like to participate in this contest, please submit a 7" by 7" 300 DPI PSD of your art and email it to mbdband@gmail.com . Your submission can have as little or as much information as you want. Deadline for submissions is May 25th. MBD will pick one design and TBATB will pick a second one for the B-Side.

The two winning artists will each receive all 5 MBD albums on vinyl, all 3 TBATB albums on vinyl, and 5 copies of the split 7" with their lovely art on it, with a letter of praise from MBD that will surely get them into all the finest salons in Paris and Berlin, due to our extreme prominence in the 1920s art world.

Other 7"s and new merch can be bought HERE.

Filed Under: Hold Steady, Murder By Death, Rocks Off, Somerset, Steampunk Worlds Fair, The Builders and the Butchers, The Hold Steady
Categories: Music News, tour dates
Comments
Leave A Comment
Back To Top