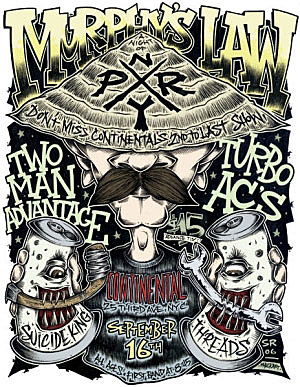 The Continental's second to last show ever was as close to the early 90's hardcore shows I used to go as you can get. Having taken down all of the famous framed pictures and other decorations that used to be present and also having removed all of those clumsy booths, the Continental was transformed into a dingy hardocre venue of days long gone. What also authenticized the atmosphere was the complete lack of air conditioning and the fact that the guys at the door completely overfilled the place with chain smoking skinheads, punks, Hells Angels, and college kids. The heat, claustrophobia and second hand smoke made me wonder how I ever did this weekend after weekend when I was a wee bit younger.

I got there just in time to see the Turbo ACs who I didn't realize were on the bill. My buddy Tim is their new bass player and I've been wanting to see them for quite awhile. They were good, really good, but not so great that I felt I was listening to something worth writing home about. They are currently set to embark on an enormous world tour, so evidently they're doing something right.

The Turbo ACs were followed by one of my current punk favorites Two Man Advantage. They have by far the most appealing schtick of any band currently in existence; a total committment to hockey, beer, and punk rock. Outfitted with masks, helmets, jerseys, and hockey suspenders, Two Man Advantage tore through a completely beer soaked set of total chaos. It was a sight to behold.

Finally, sometime around 12:15am, Murphy's Law hit the stage to close down the place in true Murphy's Law / Continental fashion. At this point in the night I was absolutely pooped and ready for bed, but the energy they put into going out with a bang really gave me my second wind. Not only did the tunes sound a zillion times tighter than their show at BBs with the Gorilla Biscuits, but the energy was at a peak and the crowd totally ate it up. Whether he was making fun of NYU and straight edge kids or biting into cans of beer and hosing the at that point sweaty and exhausted crowd, Jimmy G and Co. tore the place up.

All in all, it was the perfect send off. It emptimozed and recreated a scene that is more and more becoming nothing but happy memories and nostalgia. Not only is the Continental no more, but Jummy G made many allusions to the band calling it quits after the next album. Without a veteran band like Murphy's Law to rely on for a guaranteed good time and without a place like the Continental or CBGBs to showcase bands like Murphy's Law, a major chapter in underground music is coming to a close and will never be replicated. Everything else will just be a forgery.