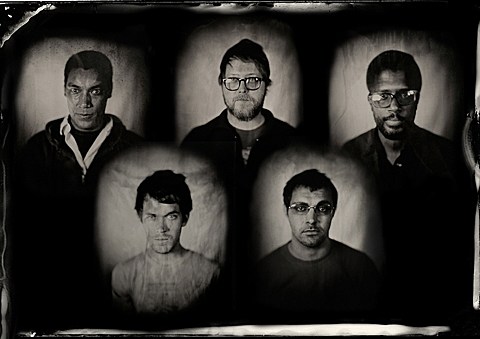 Earlier this year, Lawrence, KS rockers Muscle Worship went on a tour with fellow Lawrence band The Appleseed Cast (whose current drummer Nathan Wilder is also the drummer of Muscle Worship). Besides a shared hometown and drummer, comparisons to The Appleseed Cast aren't really warranted, but if you were going to, The Appleseed Cast haven't rocked this hard since The End of the Ring Wars. They've been off exploring emo-tinged post-rock for well over a decade now, but Muscle Worship's self-titled debut LP, which came out earlier this year, is packed with raw riffage and distorted vocals that fall somewhere between the attack of post-hardcore and the sharp quickness of post-punk. You can stream the LP in full below.

The band are heading out on another tour this December which brings them to NYC on December 10 at Glasslands for a show with Raccoon Fighter, Happy Nothing, and Tidal Arms. Tickets for that show are on sale now. All dates are listed below.

Tidal Arms, who just played a Brooklyn show with Tiger Flowers, recently dropped a heavy/atmospheric track, "Molasses," which you can stream below.