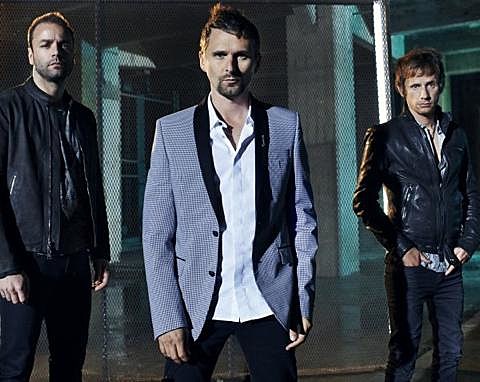 More is more rockers (and Glenn Beck's favorite band) Muse released their sixth album, The 2nd Law, this week which brings us more over-the-top arrangements, histronic singing, pomp, circumstance and cheeky humor that we've come to expect from Matt Bellamy and company, with a soupçon of dubstep to remind you what year it is. You can stream it at Spotify if so desired.

Muse are in NYC this weekend to play SNL (Daniel Craig hosts) and will be back bringing their live spectacle to North American arenas in 2013, and the initial dates announced include two NYC-area shows: Madison Square Garden on April 15 and the IZOD Center on April 19. Tickets to both shows go on sale Friday, October 12. MSG at 9 AM and IZOD is still TBA. No ticket links yet but you can keep checking Ticketmaster. All dates are listed below.

If you missed the whole Glen Beck thing, in an interview with the Guardian, singer Matt Bellamy criticized conservative politicians in America for requesting to play their hit song "Uprising." Glenn Beck, a Muse superfan, posted an open letter to Muse in response, which is below in full.

Also below is the list of all Muse tour dates, the video for "Madness" (their "dubstep" song) as well as the video for their 2006 single "Knights of Cydonia" just because it's kind of amazing.

I read your comments in the Guardian via Rolling Stone last week and feel like with a little work we could better understand each other.

As uncomfortable as it might be for you, I will still play your songs loudly. To me your songs are anthems that beg for choruses of unity and pose the fundamental question facing the world today - can man rule himself?

In the Venn Diagram of American politics, where the circles of crimson and blue overlap, there's a place where you and I meet. It's a place where guys who cling to their religion, rights, and guns, connect with godless, clinched-fist-tattoo, guys.

You seem to have a pretty good grasp of comparative U.S. and European politics, but maybe there's a pattern that you're underestimating. Throughout history, leaders have used music to lull young people into a sense of security and euphoria. They've used artists to create the illusion that they can run a country that keeps all the good and wipes out all the bad. Think Zurich 1916. Think artists getting behind guys like Lenin and Trotsky. Think of pop culture's role in the Arab Spring. The youth rises up, power structures crumble, and worse leaders are inserted.

America, on the other hand, does not rely on leaders -- we rely on the individual. Our country was built on the principles of mercy, justice, and charity -- we ultimately believe that man left alone is good. That is a primary reason I disagree with Chomsky and others that you've touted.

American Libertarians understand that smaller government gives people freedom -- the freedom to earn or lose, eat or starve, own or sell. The potential for wild success and happiness is tempered by an equal chance of failure. And it is all up to the individual to take control of their destiny.

This has been a debate since the founding of America, one that has often gotten confused. Even during the revolution -- a period filled with the greatest minds to ever discuss the idea of freedom -- there were the divisions that continue today. Robespierre or George Washington. OWS or the TEA Party.

Yet the question is an easy one: Do you believe man can rule himself? Or does he need someone ruling over him to force him to be good and charitable?

That is the fundamental divide and everything else follows. Even though faith was important to our American patriots none of them forced Paine to believe. He chose his course and in the end is remembered as a critical patriot in establishing man's first real freedom.

They understood that we don't all have to be in the same boat. But rather, focused on the star chart: Are you headed toward freedom or despotism?

The power that American Libertarians like me want to pull down is power that limits the individuals right to roam and create.

Matthew, I realize that converts are pretty hard to come by when the stakes are so high and the spotlight so bright, but I thank you for singing words that resonate with man in his struggle to be free.

I wish I could leave well enough alone and just be quiet...

...but I've had recurring nightmares that I was loved for who I am and missed the opportunity to be a better man.

Good luck on the new record.