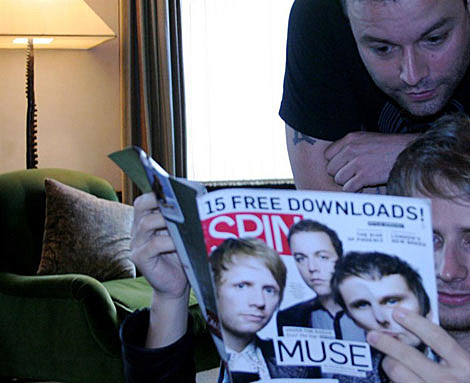 UK rock band Muse will headline (for the second time) Madison Square Garden in NYC on March 5th. Recent grammy nominees Silversun Pickups are lined up to open the show. Tickets go on sale Saturday, though there will be pre-sales even sooner. The show is part of an about-to-be-announced tour that includes a show the very next day at TD Garden in Boston. All currently known dates below.

According to Consequence of Sound, Muse is also playing Coachella.

"According to a source with knowledge of the festival's plans, Muse will serve as a headliner for the Indio, CA event, set to take place from April 16-18. This will mark the British outfit's first appearance at Coachella since 2004 and will come amidst what will likely be a summer chock-full of tour dates in support of the band's most recent effort, The Resistance.

A separate source confirms that both Hot Chip and The xx will make room in their recently announced U.S. tour and also appear. These latest additions join Devo, Craze & Klever, and As Tall As Lions, all of which have been previously confirmed by other Internet outlets.

Keeping the fun going, Vampire Weekend, Phoenix, The Avett Brothers, and Pavement are all heavily rumored, while Tegan & Sara, Spacemen 3, Pretty Lights, Cornelious, and Imogen Heap are among the others currently appearing on our Coachella Outlook page."

All currently known Muse and Silversun dates below...