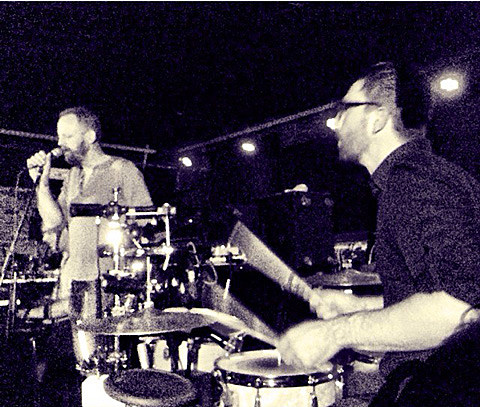 New Build and Museum of Love's tour hit NYC last night (12/3) for a late show at Mercury Lounge. For those used to Pat Mahoney behind the drum kit (LCD Soundsystem, Hot Chip), seeing him behind a mic might be a bit of a shock. (Mahoney has got a nice, soulful voice which may also be a shock.) He did pick up a tambourine occasionally, but mainly let drummer Guy Licata keep the beat very ably. Dennis McNany (aka Jee Day), the other half of MoL, kept things groovy on keys. This was only their third-ever live show but the members are all old friends and seem to have it all together. Museum of Love have been added to Holy Ghost!'s New Year's Eve show at Irving Plaza and tickets are still available.

As for New Build, apart from main members Al Doyle and Felix Martin (both of Hot Chip), this was a very different lineup than the one that toured in 2012. Here they were a trio with Joy Joseph was on percussion duty, heavy on the toms as well as steel drums. Al sang, played guitar and occasionally hit things, while Felix manned a bank of electronics in the back. They were pretty good. New Build play again tonight (12/4) at Rough Trade. Museum of Love aren't on the bill but it's a good lineup, with Future Punx, and Orange Cassettes which is the new group from Radio 4's Anthony Roman. Tickets are still available and should be at the door, too.