The Darkness played a Superbowl commercial 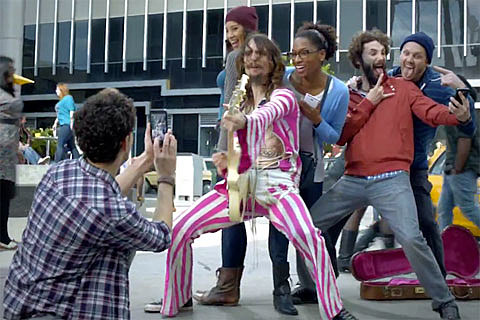 Another Super Bowl, another year where the Cowboys didn't win, and another year of music-filled commercials. The Patriots entered the field to "Crazy Train" by English metal god Ozzy Osbourne (who is currently having a feud of his own with an old bandmate). The Giants entered to "Written in the Stars" by English rapper Tinie Tempah.

Did you catch that map of Williamsburg, Brooklyn, in the Samsung commercial for their Galaxy (with stylus!)? You know, the one that had a sweet use of The Darkness jam "I Believe In A Thing Called Love"? Yeah, it was there and showed a close up of Berry and N. 1st in Google Maps. Did I mention they also have a stylus? The Darkness are currently in NYC, played Irving Plaza on Superbowl eve and do so again tonight (2/6). Watch the ad which stars the band's Justin Hawkins, below.

The spot starts with the Chordettes' "Mr. Sandman" for the first few seconds of the commercial. That song makes way for something completely different, like Motley Crüe. The band actually shows up and plays inside the race track-themed dream of the alpha male hero. He drives the track to impress Adrianna Lima while the Crüe shred on "Kickstart My Heart". Watch "A Dream Car For Real Life" below.

In the "did I just hear Megafaun in a commercial" category, Megafaun wins one for the little guys and gets a song used in a new Toyota ad. The band's song "Hope You Know" sounds super good as the soundtrack to a story-esque spot for the Camry model. Watch it below.

Also of significant note was another brand-infused OK GO music video. The band collaborated with Chevrolet to make a commercial/music video for the song "Needing/Getting", off the 2010 album Of The Blue Colour Of the Sky. The band is filmed strapped inside a Chevy Sonic, singing and utilizing both the car and a strategically placed course sprinkled with over 1100 instruments that more or less sound like the studio version of the song. The set up is meticulous, as is the band's ability to show up in a paid advertisement in an easily-digestible, yet very memorable way.

My single most favorite lyric placed in a Super Bowl commercial goes to the lines I know it must be killing time / unknowingly mine. Audi tries to end the whole Vampire craze with its 2012 game day commercial featuring Echo & The Bunnymen's "Killing Moon." Watch below.

--
Samsung + The Darkness "I Believe In A Thing Called Love"

Budweiser was all over the broadcast, as per usual. I enjoyed the end of prohibition spot; that included a nice use of Randy Newman's theme from the Natural called "Knock the Cover Off the Ball". A mashup of Flo-Rida and The Cult soundtracked a different Budweiser brand spot. View the prohibition one here and the mashup one here.

Bud Light proved life can be like a mullet - where business and fun mix, except their mullet sounds like Avicii's "Levels" (which samples Etta James, RIP). Watch that here. BL also had a spot right before half-time with LMFAO and a free remix give-a-way, via Shazam.

Speaking of Halftime, you probably know Madonna was the featured performer. You might also know that LMFAO, Cee Lo, Nicki Minaj, and M.I.A. performed with her. Did you catch M.I.A.'s vertical middle finger gesture coupled with the word "shit"? That happened, kind of like Madonna's lip-synching. I'd kindly direct you to Flaming Lips' lead singer Wayne Coyne's twitter to see what he thinks. The full performance of the half-time show can be seen here.

James Brown was the inspiration for an overweight dog to get in shape in the VW Super Bowl commercial. The spot (seen here) is a sort-of follow up to the famous "Kid Vader" spot from last year and uses JB's "Get Up Offa That Thing" as an exercise motivator for the hero-dog.

Speaking of motivation and inspiration, the crown jewel of training montages gets a fresh take in a new commercial for Hyundai. Um, yes of course I'm talking about the Rocky theme "Gonna Fly Now." Give it a try here.

I will hand it to Pepsi for giving a go at biggest play in the super bowl. As always, the talent they enlist is heavy. Song wise they used not one ("It's Getting Hot In Here") but two ("Respect") huge tracks. The latter is a new version sung by Melanie Amaro made available on iTunes. Though the king is played by Elton John the spot is stolen by a classic Flava Flav moment at the end. Watch it here.

I'm not sure what to say about Chevy's use of Barry Manilow and his song "Looks Like We Made It" in their truck spot. On one hand, they totally took a big jab at their rival Ford on national television. On the other hand, they used one of the cheesiest songs in the world. Confusing. What do you think when you watch it?

Eskimos, A Suzuki, and 50 Cent. Jeeeah. "Moving On Up" can be heard and seen in the car brand's Super Bowl spot here.

fun.'s "We Are Young" (featuring Janelle Monae) was in a Chevy Sonic commercial.

My wife definitely enjoyed the H&M spot featuring David Beckham and his new line of underwear. She totally liked it because of the song ("Don't Let Me Be Misunderstood" by the Animals) and not the slow-motion shots of the football player's body. See the spot here.

Animals are always prevalent in advertising, especially in this year's Super Bowl. We already talked about VW's dog. That was way better than the moonwalking pup in Sketcher's game day commercial. The spot, featuring Tone Loc's "Wild Thing" can be viewed here.

I wonder how many of you turned the game (or your attention) off at the end and missed the sweet Art Brut song giving some balls to anothre Chevy commercial. "Bang Bang Rock And Roll" makes its advertising debut in a new spot for the Sonic.