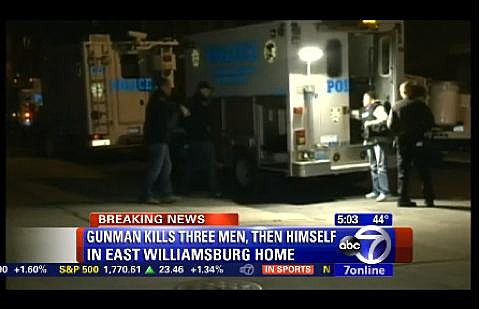 A musician furious over being thrown out of a rock band extracted bloody revenge in an early morning attack in Brooklyn Monday -- using a military-style rifle to fatally shoot three people believed to be bandmates, wound another person and then take his own life, law enforcement sources said.

The triple-homicide took place at 318 Maujer St., a Bushwick building where at least some members of the band are believed to live.

The killer, brandishing a Century Sporter .308-caliber semi-automatic weapon with a 20-round magazine, showed up around midnight and opened fire on a person standing outside.
That person was wounded.

Then he stormed into the building and kept firing off round after round...

...The band is made up of Iranians who have been in the country for a while and were seeking asylum here, law enforcement sources.

A neighbor, who identified himself only as Frank, said the building has been hosting boisterous parties.

"During the summer it was ongoing, really loud parties with the street blocked off by gypsy cabs,'' he said.

"It was the usual hipster rave scene.'' [NY Post]

Speculation after the story first broke and has since been confirmed by The New York Times that the band in question was Brooklyn/Iranian band the Yellow Dogs who we recently called "constants in the NYC indie circuit". We last caught them with !!! at the end of last year at Music Hall of Williamsburg.

UPDATE (1:44 PM): Yellow Dogs' manager has released a statement that says the assailant was not in Yellow Dogs but in another Iranian band, and that two of the three victims were in Yellow Dogs:   Sourosh Farazmand (guitarist) and Arash Farazmand (drummer), along with a friend of theirs, fellow musician and author Ali Eskandaria.

UPDATE 2: Actually all three killed may be in Yellow Dogs as originally reported, and the killer was in their sister band The Free Keys.

An ABC news report video is below as is a 2009 interview CNN did with Yellow Dogs on the underground Iran rock scene.

Our thoughts go to the victims' friends and families.