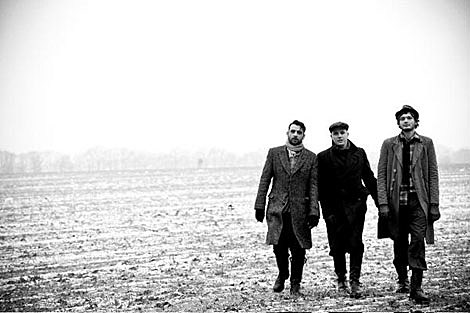 Mutek, "the premier North American festival for forward-looking electronic music and digital creativity," will happen this year from May 27th to May 31st in Montreal. The announced line-up includes Moderat (the Modeselektor + Apparat collab visiting Webster Hall on May 30th) and many, many more (line-up below).

Before that, the Mutek show goes on the road, with a six-date tour stopping at Studio B in Brooklyn on Saturday, April 11th. Performers for that date will include:

Poster, full Mutek lineup, and other information, below... 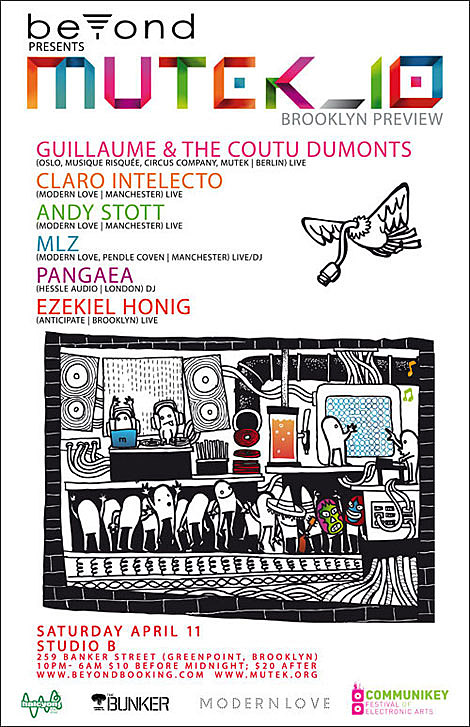 Mutek is an international festival of electronic music and digital creativity, which is celebrating it's 10th anniversary this year from May 27 to 31 in Montreal, Canada. To say that Mutek is innovative is a huge understatement. This organization has been presenting the most forward thinking electronic music festival in North America since it's inception. While showcasing well known artists such as Ricardo Villalobos, Atom Heart, Monolake, Pole, and Matthew Herbert, they also played a huge role in introducing and developing Canadian artists such as Akufen, Deadbeat, The Mole, Mathew Jonson, Pheek, and many more. The full list of artists who have participate in Mutek over the past 10 years is truly mindboggling, and can be found on their Myspace page. Mutek is a lot more than a music festival though, putting an incredible amount of care and attention into the visual presentation of the events, and providing panels and forums for attendees and participants to share ideas and meet like-minded people. Discovering Mutek was truly a lifechanging event for us, and we're hoping to convince more of Brooklyn to head up to Montreal this year to check it out by bringing a small piece of the festival to you for one night only.

March 17, 2009 -- Montreal: The moment has finally come. With just over eleven weeks to go before the launch of the highly anticipated tenth edition of MUTEK, which will run from May 27th to May 31st this year, the festival organization is proud to announce its first 28 confirmed performers, an impressive and ambitious list that is only a taste of the more than 50 acts who are expected to perform in this singular five-day anniversary.

This year's line-up is a culmination for us, a climax of sorts that delicately balances the many traditions that MUTEK has cultivated over the last nine years, while introducing some important new elements that will help broaden the festival's horizons for the next decade. This initial list will only grow richer and more diverse -- with many more headliners still to come -- but for now we are eager to share with the public the broad contours and first tastes of what will be an unforgettable and, in our estimation, unmissable MUTEK_10: