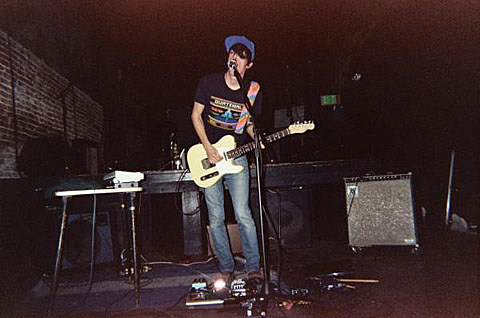 "Seeing Sun Araw live feels as much like a dream as reality, and high energy never came easy. It felt a bit like drowning in codeine syrup, you struggle at first, and then eventually realize it feels better to be in the syrup than out of it.

Cameron really pulls out the tropical nature of SoCal in his music, and almost gives you the impression of sleepwalking through a luau. This is especially strange because he originally hails from Austin, TX, which is anything but tropical.

His music feels a bit like you're searching for some sort of hidden revelation amongst some ancient ruins on a desert island, among many other conjurations your mind will develop while being sunk into the vibes." [Sub-Radar]

LA's Sun Araw (aka Cameron Stallone) will kick of a FULL BAND tour of the East Coast on June 2nd at the Mutek Festival in Montreal, followed by a string of dates, a few in the NYC-area included. On June 3rd Stallone will DJ Coco66. The occasion is the NYC debut of Sun Araw's own LA-based party WHERES YR CHILD - "A dub/italo/dance party rooted in the traditions of cosmic LA." Sex Worker/Psychic Reality, and Todd Pendu are all also on that bill and tickets are on sale. The following day (6/4), the Sun Araw Band will play live for the first time in NYC (Sun Araw has only played solo in the past), in Brooklyn at 285 Kent with M Geddes Gengras, Matthewdavid, and D'Eon. Then after a quick trip down to Baltimore to play Ottobar, Hoboken club Maxwell's will host the band on 6/7 with M. Geddes Gengras and Deep Magic (tickets). All dates are listed below.

Sun Araw will be previewing material from a forthcoming LP entitled Ancient Romans, and the band currently has multiple releases up for sale at their webstore, including a pair of recent cassette releases Sadistic Candle and Hold The Phone. For those of you who are curious as to what Hold The Phone is like, here's a preview.

Are we clear? If not, head to their store and stream samples from the cassettes and other releases.

Matthewdavid, who will play the 6/4 285 Kent show, is also on board to support Gaslamp Killer at Knitting Factory on 5/28 (tickets). Matthewdavid recently released a collaborative cassette with Sun Araw, which is now sold out. They also played a show together at the Smell in LA last night (5/5). LA Record helped promote it by having the two artists compile a mixtape of YouTube videos.

Annual electro festival Mutek goes down in Montreal this year from June 1-5, and features multiple notables like Amon Tobin, Four Tet, ARP, Sun Araw and dozens of others. Tickets are currently on sale. The lineup is below. We haven't been since 2009 and miss it.

And you can prepare for the fun TONIGHT (5/6) in NYC! Public Assembly will host "The Bunker: Mutek BK Preview" with performances from Akufen, Stephen Beaupre, Vincent Lemieux, Kangding Ray, Safety Scissors, and Sutekh in two rooms starting at 10PM. Tickets are still available. 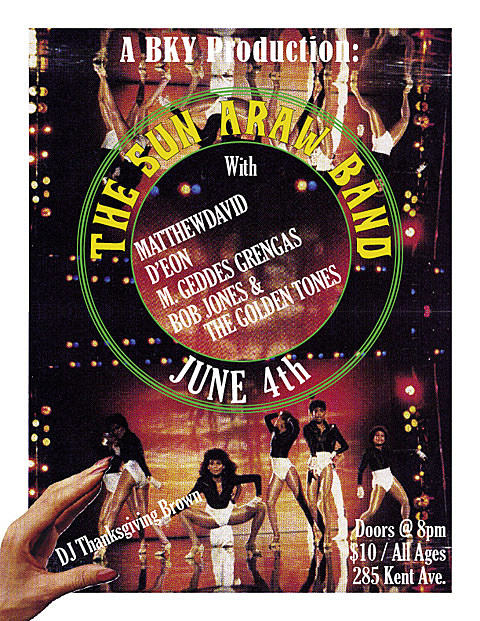