photo: Mutilation Rites at Acheron in 2013 (more by Fred Pessaro) 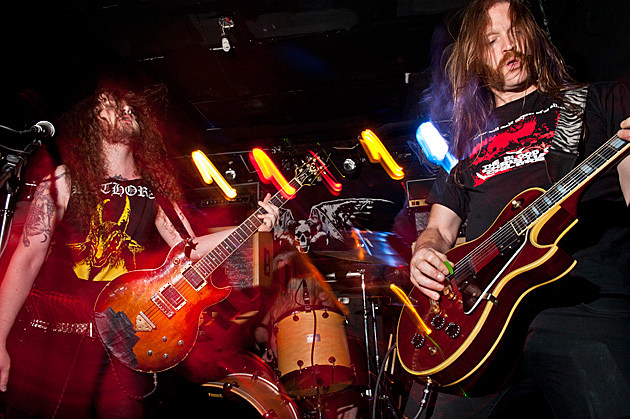 Brooklyn black metal band Mutilation Rites are on the road on the way to SXSW with promising German band Mantar. See what SXSW shows you can catch those bands at in our SXSW 2015 Metal Roundup, or in their lists of dates below.

After Austin, Mutilation Rites make their way back up North and play a hometown show without Mantar on March 31 at Acheron with Anicon, Iron Force and Sunrot. Tickets for that show are on sale now. All dates are listed below.

No NYC shows announced for Mantar yet, but meanwhile they're finally giving their great 2014 debut album, Death By Burning, a US release on May 19 via Brutal Panda Records. Here's what we said about it last year:

They're a bass-less two piece but with the total racket they make, they don't sound like they are. It's huge, thick guitars on top of bulldozing drums and a vocalist that sounds equally inspired by hardcore and black metal... it's a great fit that they're playing with the Melvins.

Stream Death By Burning, and a track from Mutilation Rites' newest, Harbinger, below...