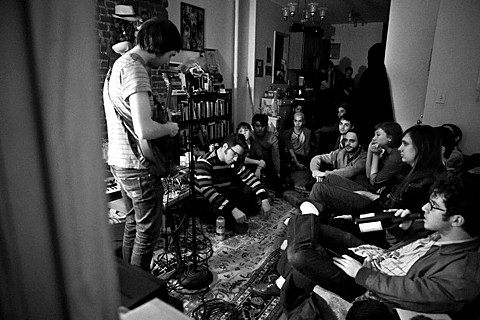 Mutual Benefit is the project of Jordan Lee (who according to Facebook, lives in "NYC sometimes"), and he just gathered a number of musicians to help him record his first official full length, Love's Crushing Diamond, which came out earlier this month. The album's been gaining some internet buzz, having been named Best New Music by Pitchfork, and the band's been called a Band To Watch by Stereogum. And it's not surprising; this is a strong record. Vocally, Jordan Lee isn't too far off from Peter Silberman of The Antlers, and musically it's the sort of folky chamber pop that Sufjan was doing in the early-mid '00s. There are also parts that get a little more dissonant though (there's a member credited to providing "cacophony") in a Microphones circa The Glow Pt. 2 kind of way. You can hear the album for yourself by streaming it in full below.

Mutual Benefit have played their fair share of NYC shows in the past few years, having most recently played Muchmore's during CMJ, and they've got a couple more shows scheduled at the moment. One of those is another in NYC and happens at new Williamsburg venue Baby's All Right on November 9 (where we had our BV CMJ parties). Tape Deck Mountain opens the NYC show, and tickets for the show are on sale now.

All dates are listed, along with the LP stream, below...