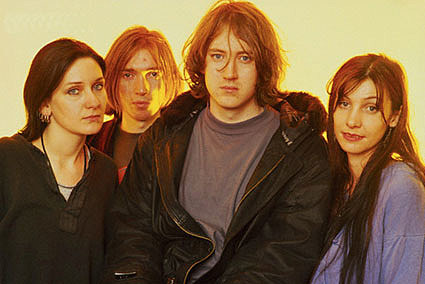 Frank Riley, the group's long time booking agent who started working with My Bloody Valentine more than two decades ago, confirms that the band will play shows in 6-8 U.S. cities.

Currently, only one show is confirmed: a headlining slot at the soon-to-be-announced All Tomorrow's Parties Festival in upstate New York the weekend of September 19-21. Kevin Shields is curating the event, which will be similar to the British promoter's weekend-long UK festivals at holiday camps in Camber Sands and Minehead. The New York weekender will be the first stand-alone U.S. All Tomorrow's Parties Festival since 2003 and 2004 events in Los Angeles.... [Daily Swarm]

"It will take place at Kutshers Country Club in Monticello, New York......In keeping with the spirit of the British ATPs, ATP New York is really, really small. As in, only 3000 people get to go. And you all live on the site for three days, staying in motel and hotel rooms. No single day passes will be available. Tickets go on sale this Friday, April 25, at the ATP website." [Pitchfork]