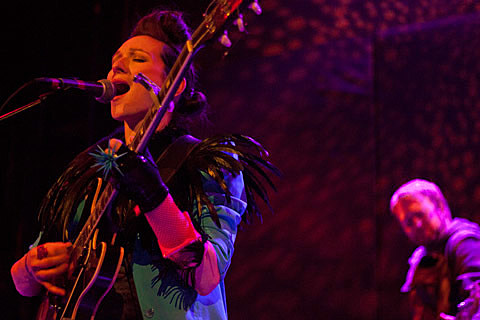 Shara Worden is set to release her fifth My Brightest Diamond album, This Is My Hand, on September 16 via Asthmatic Kitty. The first single from the album, "Pressure," has MBD in great form, offering another helping of the arty chamber pop she's become known for. It sounds like a winner for longtime fans, and if you're unfamiliar, anyone who digs the last few St. Vincent records or Sufjan's Age of Adz should check this out too. You can listen over at NPR.

My Brightest Diamond has a European tour scheduled for the fall, and though no North American tour has been announced yet, there's a few dates scheduled including ACL and a NYC show happening just before that on September 25 at Bowery Ballroom. Tickets for that show go on sale Friday (6/6) at noon with an AmEx presale starting Wednesday (6/4) at noon.

All dates (including a few Shara solo appearances) are listed, with the video for "Be Brave" from her last album, below...

My Brightest Diamond - "Be Brave"