photo: My Brightest Diamond at ACL 2014 (more by Tim Griffin) 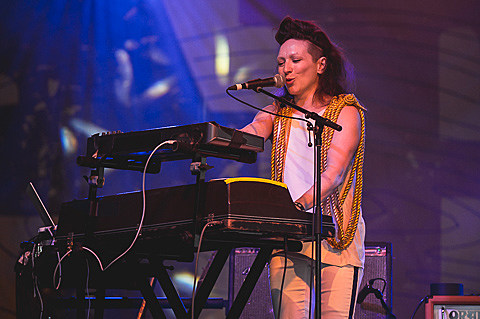 My Brightest Diamond was recently announced for BRIC House's 2016 spring schedule, playing the Downtown Brooklyn venue on March 18 (tickets). That's not her only upcoming show though. She has a few other 2016 dates, including NYC's Rockwood Music Hall on January 16 (stage 2). That's Paradigm and Windish Agency's APAP showcase, and also includes Rob Moose (who's worked with MBD, and is a member of Bon Iver and yMusic) doing a set with past collaborator Gabriele Kahane, plus Chris Eldridge and more TBD. Tickets for Rockwood are on sale now. All MBD dates are listed below.

My Brightest Diamond also just wrote and performed a new song with Ben Arthur, as part of SongCraft Presents' 'Songs of the Road' series. The premise is that you write a song from scratch and record and perform it the next day. Theirs is called "Right Here With You" and it's a horn-filled tune that you can watch/listen to below (via Paste).