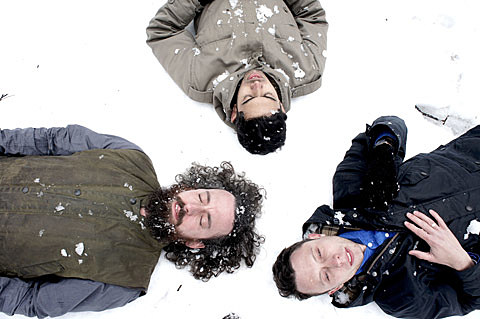 Though Australia's My Disco derive their name from a Big Black song, this trio have more in common with the dancable post-punk rhythms of Gang of Four. In fact, My Disco explore krautrock, minimalism, and art-punk ala Wire alongside punk-funk rhythms on Little Joy, the band's debut for Temporary Residence Limited. The release, due on Jan 25th on CD and 2LP, features the burners "A Turreted Berg" (available for the first time here) and "Closer", which are both streaming below and downloadable above. Preorder a copy on vinyl and the first 200 get a limited edition colorway.

If you're wondering where you may have heard the name My Disco before, it might have been when the band toured the US and played Europa in 2009 with tourmates Young Widows. It was at that Europa show that Evan Patterson filled in for bassist Liam due to a theft of his passport. The band also shared a split with Young Widows as part of their split 7" series on TRL. Speaking of Young Widows, we recently asked Evan Patterson and his brother Ryan (of Coliseum) about their highlights of 2010.

All My Disco tour dates (none in the US), as well as song streams are below.

My Disco - A Turreted Berg