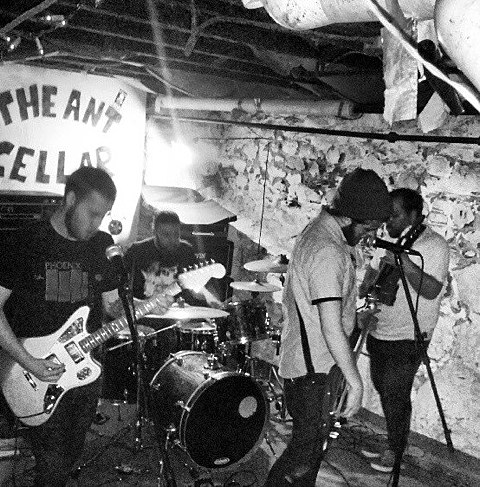 Massachusetts hardcore band My Fictions have announced that they're teaming up with The Saddest Landscape (who just played the BV-presented Touche Amore show) for a split EP, When You Are Close, I AM Gone, due out on November 12 via Topshelf. This kind of thing happens all the time, especially in the punk world, but this particular split is especially notable because aside from featuring a previously unreleased track from each band, it also includes a 13+ minute collaborative track from the two artists. Regarding the collaboration, My Fictions guitarist Ryan Boone tells us:

The Saddest Landscape is a band that My Fictions practically grew up listening to. What started as a mutual love and respect for each other's music, developed into a friendship between our bands, and from this a split seemed like a natural progression. Everyone really wanted the release to be something unique, so Andy's idea for a collaborative song was something that really got everyone excited. Writing a thirteen-minute song with seven dudes was pretty challenging at times, but it was an extremely valuable experience and helped us grow a lot as musicians. We're really proud of the finished product, we had a very specific vision and the record definitely lives up to our expectations.

My Fictions' own contribution to the split is the double-time burner "You Never Stay," which makes its premiere in this post. You can stream that below.

Both My Fictions and The Saddest Landscape will be at the free unofficial Topshelf CMJ party at Suburbia on Friday (10/18). The lineup also features reunited emo vets The Jazz June, atmospheric post-hardcore band Caravels (both of whom were among our 30 artists to see at CMJ), Prawn and Enemies. The Jazz June, Caravels, and Enemies also play the sold-out official Topshelf showcase at Saint Vitus a day later (10/19) with Braid and others.