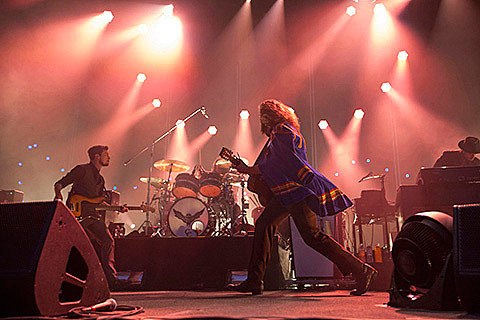 As mentioned, My Morning Jacket, who were in NYC for a show at Williamsburg Park, will return to the area at the end of the year for a three-night run at Port Chester's Capitol Theatre from December 27-29. The shows will be part of the band's Spontaneous Curation Series, where you can help pick what songs they play, and MMJ promise not to repeat songs on different nights. There will also be TBA guests at each night. Those shows were announced over a month ago and they just finally were given ticket links. Tickets for all three nights go on sale Friday (9/14) at noon.

Two days after that run ends, My Morning Jacket will play a New Year's Eve show at Boston's Agganis Arena (12/31) with Preservation Hall Jazz Band, who they've collaborated with in the past. This one won't be part of the curation series. Tickets for that show go on sale Friday (9/14) at noon with a venue presale starting Thursday (9/13) at 10 AM.

As discussed, MMJ will also be in the NYC area for a Levon Helm tribute at the Izod Center on October 3 in East Rutherford, NJ with Ray LaMontagne, Mavis Staples, Lucinda Williams, Gregg Allman, Warren Haynes, Jorma Kaukonen, and more. Tickets for that show are still available.