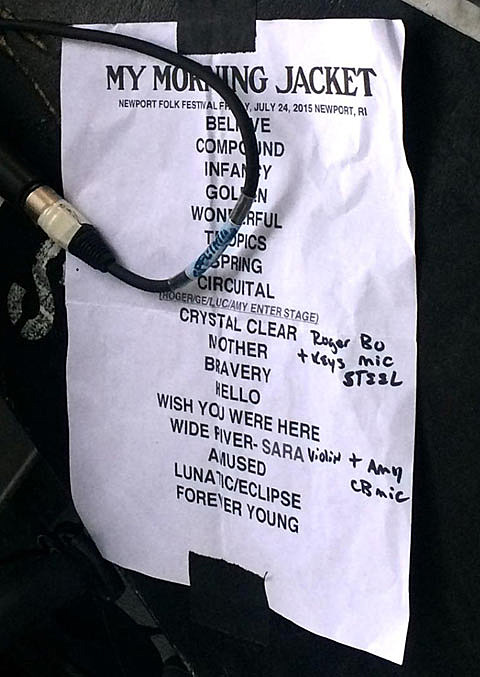 As rumored, Roger Waters used My Morning Jacket as his backing band at a Newport Folk Fest on Friday night (7/24). We'll talk more about that in more detail later, but as you can see in the setlist above and below, My Roger Jacket played Pink Floyd songs, Waters solo songs, and some covers too. MMJ played their own set too. Amy Helm (Levon's daughter), G.E. Smith, Lucius and Sara Watkins also joined for some songs. MMJ, Roger, and G.E. Smith previously teamed up for a Levon Helm related benefit in 2012.

Though it was gorgeous all day, the clouds really started rolling in during MMJ, and the skies opened up during Roger's set. The sun was back out by the end of his set though.

A few Instagrams below...

#RogerWaters, closing out the #NewportFolkFestival with an astoundingly eclectic set with a little help from #JimJames, #MyMorningJacket, and the great G.E. Smith. // - @klaus_kinski

Jim James and #MyMorningJacket delivering sonic heviosity to a still cloudy but totally enthusiastic #NewportFolkFestival legion. #RogerWaters up next! - Klaus

The #newportfolkfestival has your man Klaus looking FABULOUS. #LeonBridges just slayed the Quad stage; #Calexico up next. DYING for the #RogerWaters (and #MMJ?) set later.