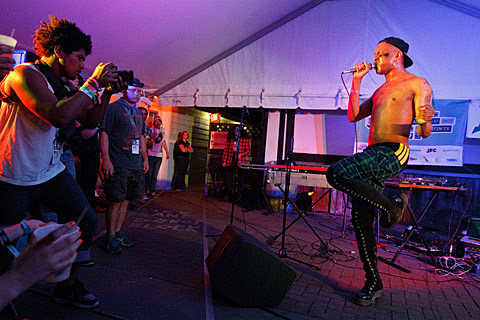 NYC rapper Mykki Blanco likes to spend a lot of time on the road (and playing locally), and he recently announced more shows for this year, including a hometown gig on New Year's Eve (12/31) at Gramercy Theatre. Tickets for that show are currently on PopGun presale (password: "CosmicAngel"). They go on Live Nation/Mobile App and Music Geeks (password: "musicgeeks") presales Thursday (8/8) at 10 AM, and general on-sale starts Friday (8/9) at 10 AM.

That show comes after a number of other North American shows this summer/fall, including Austin's Fun Fun Fun Fest, and another NYC appearance as part of the free Afro-Punk Festival, which goes down on August 24-25 at Commodore Barry Park with Danny Brown, Le1f, Big Freedia, Death, Chuck D, and more. RSVP for Afro-Punk Fest is still open.

All Mykki Blanco dates are listed, along with a video, below...