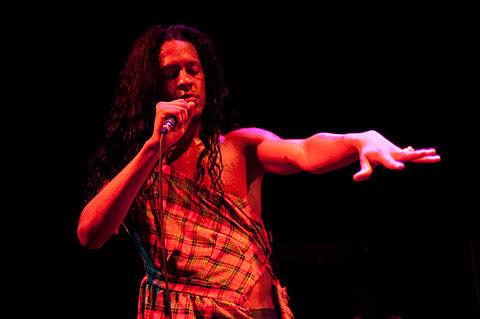 NYC rapper Mykki Blanco, who puts on a hell of a show, plays in the area pretty often and as mentioned, you can catch Mykki TONIGHT (12/7) at 285 Kent with Autre Ne Veut, Oneohtrix Point Never, and the recently added Majical Cloudz (more on them in a minute). Tickets for tonight's show are still available.

But if you can't make it tonight, or just want to see Mykki again in the near future, you're in luck because it's just been announced that the rapper will play Mercury Lounge on January 16. Tickets for that show go on sale Friday, December 14 at noon.

Mykki Blanco is also featured in the new video for for Autre Ne Veut's great new single, "Counting," off of his upcoming album, Anxiety. You can watch that video below, and here's to hoping they join each other on stage at 285 Kent tonight.

Majical Cloudz, who were added to tonight's 285 Kent show, began picking up speed after appearing on Grimes' album, Visions, and touring with her. They recently released their Turns Turns Turns EP via Arbutus, which made Braids' and Blue Hawaii's top 10 LPs of 2012 lists. You can stream the title track from that EP and another, "What That Was," below.

Streams and video are below.

Majical Cloudz - "What That Was"