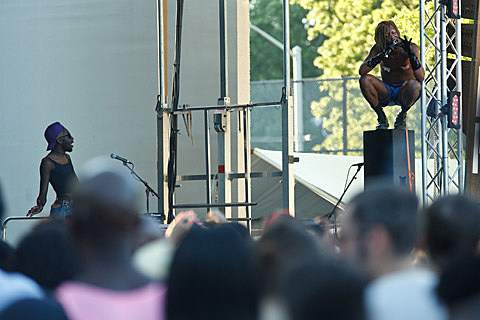 NYC rapper Mykki Blanco will be leaving rap to pursue investigative journalism focused on "homosexuality and gay culture in remote corners of the world." The rapper's first foray into the field will be going to Nepal in May to learn about the rights and culture of the country's third gender "Meti." Mykki's statement also includes plans to go to school for sociology and gender studies soon to learn more about his new focus and the explanation that "writing words that rhyme over beats made by other people mostly male" is no longer an interest.

Read the statement in full below...

I have decided to focus and pursue a passion I've had for quite some time now which is investigative journalism, particularly focusing on documenting and writing about homosexuality and gay culture in remote corners of the world. I feel that the entertainment and music industry has given me a wonderful platform, one I intend to use as a novice in this field to share my research my writing and my findings with a much wider audience in a forum that might be more accessible than others. My longterm goals would eventually see myself enrolled in school in a sociology and gender studies program while also focusing on writing and beginning to work academically. I've taken away much from the lectures & discussions I've given so far in my career and would hope to continue to contribute and engage in dialogues focusing on gender/sexuality and its role in the entertainment/music industry's while also studying and fulfilling my desire to follow my new interests. I would like to ideally become an accredited journalist working and writing professionally and I think keeping my platform as Mykki Blanco as a hub not just for entertainment but for all of these points will create an organic think tank those that follow me can benefit from. This May I have decided to travel to Nepal to begin learning about homosexuality and LGBT rights in Nepalese society specifically that of the "third gender" group referred to as "Meti". I've decided to begin to do this kind of "in the field" work as a way to gain initial experience doing investigative journalism. As a novice to this field what I hope to gain the most is an inside look at what daily life is like for these individuals in their society and a way for me to take the first baby steps in learning to write and work in this way before I re-enter school ( I've missed most admissions deadlines for the fall ). Many feel as if I'm "jumping ship"... "Where's your album" etc... But I must be honest, writing words that rhyme over beats made by other people mostly male no longer interests me and I've felt this way for over a year now. I do not find being a "rapper" fascinating and rather than waste the remaining 9 months of 2015 in some kind of FAKE existential crisis where I pretend I don't know what I want I'm taking the initial steps to securing what I know I do want, to observe and write about places and cultures in our world not known to many and to better educate myself about the cultures, gender politics and patriarchy that shape our society so that I may one day be able to speak and influence our world in a way a dance song and music video cannot.
( excuse my grammar, I'm learning )