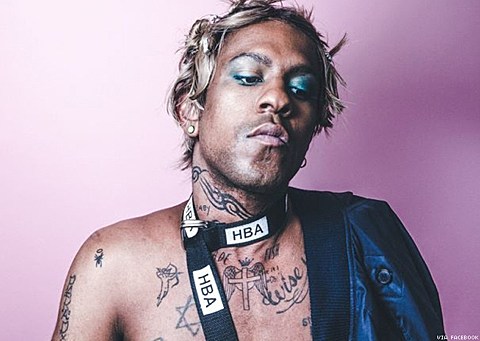 Mykki Blanco recently announced that he'd no longer be rapping, but that doesn't mean he's not performing at all. Not long ago, he gave a spoken word performance called Baby Steps: How to heal yourself from everyday Psychic Poisons or Repentance for Dummies, and uploaded video along with the following statement:

Most people are familiar with my work in rap music and so may not be aware of my background in theater, acting and writing.

Last summer I participated in a writing residency at Galeria zé dos bois in Lisbon Portugal. Most of my theatrical and spoken performances have been very ephemeral, connected to either larger events or apart of lectures and panel discussions and have not been filmed. But I am happy to share with you here in its entirety my solo performance.

You can watch the performance below. No word yet what exactly Mykki's future performances will be, but he did just schedule a free NYC show happening August 22 at Riis Park Beach Bazaar, the Rockaway Beach location that the Brooklyn Night Bazaar people are now booking. Other artists TBA for that show.

Mykki's old friend from the rap days, Le1f, also announced a new NYC show today. He plays the POP Montreal Northside Festival showcase happening June 14 at Brooklyn Bowl with Princess Nokia and DJ HVAD. Tickets for that show are on sale now, and you can also try to get in with a Northside badge.

Le1f's most recent single is a remix of Nicki Minaj's "Truffle Butter." Listen to that, with the Mykki Blanco videos, below...

Baby Steps: How to heal yourself from everyday Psychic Poisons or Repentance for Dummies - PART I from Galeria Zé dos Bois on Vimeo.

Baby Steps: How to heal yourself from everyday Psychic Poisons or Repentance for Dummies - PART II from Galeria Zé dos Bois on Vimeo.