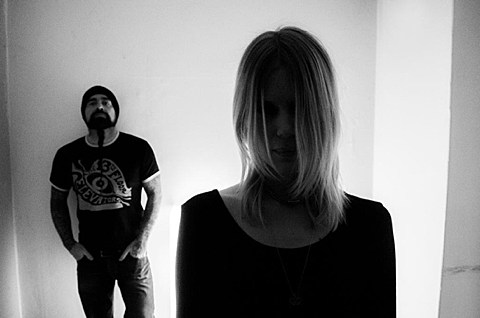 No longer mysterious one-woman black metal project Myrkur (aka Amalie Bruun of Ex-Cops and formerly of MINKS and Frankie Rose's band), released an EP on Relapse earlier this year that stirred up its fair share of controversy among metal purists who decried her lack of heavy bona-fides. That's unfortunate, considering the EP is pretty great, but hopefully those cries will be silenced with the news that Myrkur's debut LP features some of the black metal heavy hitters she's been inspired by. She's currently working on it in Oslo with producer Kristoffer Rygg, the man behind Ulver. On top of that, it will feature Teloch of Mayhem on drums and contributions from Øyvind Myrvoll of Nidingr and Dodheimsgard. The full-length is as yet untitled, and it's due out in 2015 on Relapse.

Myrkur shared a demo for the new album called "Skaoi" last week, and she's also announced her first-ever live performance, which will take place at Roskilde Festival in Denmark next July.

Speaking of Mayhem, they'll also be heading out on tour with Watain and Revenge in January.

Check out that new Myrkur demo below...