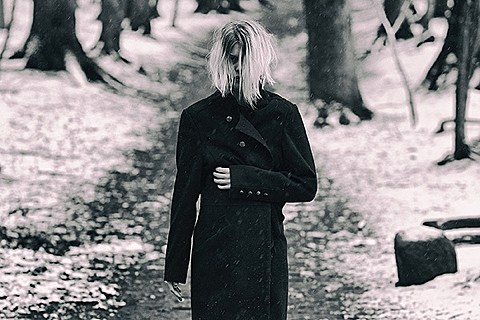 Over the summer, we wrote about mysterious Danish "one-woman black metal project" Myrkur, who had announced an EP coming out on Relapse. We got an advanced listen of the EP and loved what we heard. Pitchfork, Stereogum and others were also on board. We called it "one of the best atmospheric black metal albums of the year so far."

We also mentioned it was surprising how Myrkur seemed to appear essentially out of nowhere, but that we dug into it and came up with an idea of who it was. Here's what we said then:

Two clues: 1) This is not the first time her music has been featured on BrooklynVegan, 2) She is pictured in the screenshots you see in this post, which were pulled from a sort-of-leaked Myrkur promo video we found.

What we didn't say is that we had a feeling it was Amalie Bruun of NYC indie pop duo Ex Cops (who have certainly been featured on BrooklynVegan). She was also in MINKS and is one of the many who has played in a band with Frankie Rose. Amalie is of Danish descent, and her bandmate Brian Harding outed her as a black metal lover in a 2013 interview for the Village Voice.

Myrkur is the work of Amalie Bruun, a Danish artist and longtime black metal fan. Bruun says she writes and records all of her music in Denmark, where the history of Scandinavia and Scandinavian nature--forest, mountains, cold, and Nordic magic--inspire her. She references second-wave Norwegian black metal bands like Darkthrone and Ulver as influences, as well as Edvard Grieg, the 19th-century Norwegian composer known for his romantic works and occupier of a special place in the Norwegian collective conscience. She's also in another band, the indie-pop duo Ex Cops, and she's a model who has been featured in fashion publications like Refinery 29 and an ad for Chanel, directed by Martin Scorsese.

No live shows announced for Myrkur just yet, but you can catch Ex Cops when they tour with Dum Dum Girls. Just don't expect any blast beats.