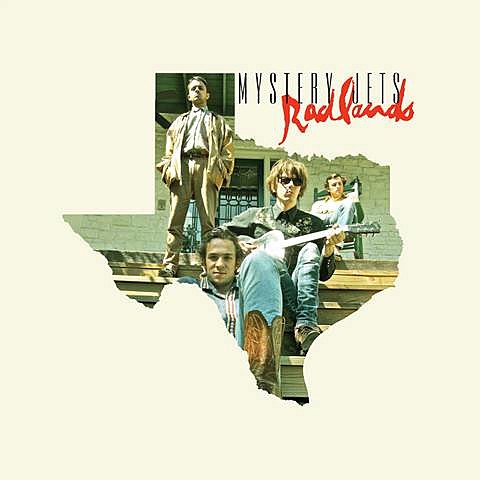 Mystery Jets will release their fourth album, Radlands, on June 5 via Rough Trade. The band will play a release party for the record at Brooklyn Bowl on June 11 and tickets just went on sale for that. Mystery Jets will then open for ever-popular UK piano balladeers Keane for a string of dates including a June 15 date at Beacon Theatre. All Mystery Jets tour dates are below

This was the band's first album made after losing basist Kai Fish, who put out his first solo album Life in Monchrome last year. You might be able to tell from Radlands cover art, the London band made the album in Texas...Austin specifically. Explains main Jet Blaine Harrison:

We've always wanted to make a record in America and after touring Serotonin the time felt perfect to go and do it. Our first three albums were entirely conceived and recorded in London so going out to Austin felt like the furthest place from everything we knew. We arrived with a handful of songs, but one in particular felt like it captured the spirit of why we had come there. It was called Radlands (a fusion of the 1970s Terrence Malick film Badlands and Redlands, Keith Richard's Sussex estate), which is also what we named our studio; a big old wooden house on the banks of the Colorado river.

All we brought on the plane were the guitars on our backs, so we ended up borrowing all this amazing valve gear from an old guy called jack who ran a little studio up in the hills-which is why the songs sound the way they do. In the daytime we wrote lyrics on the porch and in the evenings a family of Deer would gather in the back yard to hear us play. Some nights we drove into town to drink and bring people back to play on the songs.

When we arrived home, it was hard to believe any of it even happened. It somehow all felt like a strange dream. But when Dan Carey heard it and invited us down to his studio we listened back to everything and it was all there, it was real. All we were missing were some gospel singers, which he found in the Streatham community ladies choir...

Texas proved to be a big influence on the record, with song titles like " The Ballad of Emmerson Lonestar" and "Lost in Austin," the latter of which references the storied Marfa lights. Musically, Mystery Jets do what they do -- anthemic UK-style indie.

For a taste of the new album, the video for "Someone Purer" and a stream of "Sister Everett" are below.