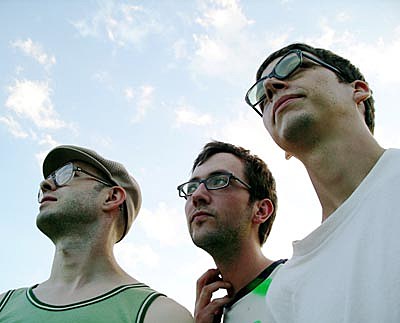 "We're Mystery Palace from Minneapolis, MN. We're a three-piece electronic group that employs two broken, (circuit bent) keyboards, bass, drums and voice. Typically, Circuit Bending is synonymous with noise art... However, we assure you.. We're a soft-pop group, and probably the one of the first groups of our kind. We've been doing our thing for about two years now and have a 12" single of our song "Stepchild" on one-sided yellow vinyl out on Minneapolis' own Totally Gross National Product. We also have just released "Flags Forward" the debut Mystery Palace LP on CD, digital media and limited 12" vinyl on Zod Records. I guess if we have to make a musical comparison.. we sound probably most similar to Shoegaze music minus the guitars... Kinda' like MBV meets Ellen Allien with a little Dub influence. Hope this helps and thanks for your time."

Mystery Palace (Ryan Olcott on keyboards & voice, James Buckley on bass, and Joey Van Phillips on drums) will appear at The Stone in NYC tonight, January 17th, and then again on Monday at Pianos (Martin Luther King Day / Obama-eve) with We Are Country Mice. All dates below...