Naam at the Action PR showcase at SXSW (more here) 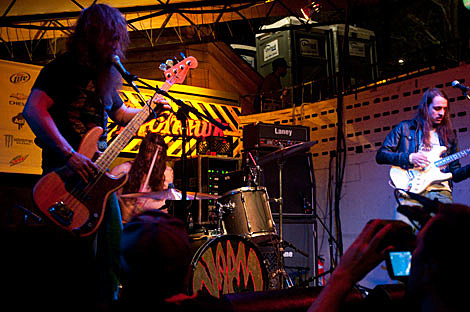 Naam will headline Cake Shop on June 9th alongside support from Richmond's downtuned miscreants Cough, the rifftastic Elder, and Brooklyn's own Elks as part of a BV/1000 Knives production. $10 gets you in the door.

The show is one of a pair that Naam will play with the mighty Elks, as both will support Karma To Burn and Year Long Disaster at Knitting Factory on Friday (5/14). Want to go? I have two pairs of tickets and one copy of Karma to Burn's new album Appalachian Incantation to give away, details on how to win are at the bottom of this post. Appalachian Incantation hits store shelves on 5/18.

Naam is also scheduled to play the NY Eye & Ear Fest on My 23rd. Black Dogs, Liturgy, Effi Brest, Twin Stumps, Blondes, Hunters, and more will all play the fest over the show's two days. Tickets are still up for May 22nd, May 23rd, or both.

Some videos, full Cough dates, and details on how to win Karma To Burn tickets are below...

To win the Knitting Factory tickets to Karma To Burn, email us at BVCONTESTS@HOTMAIL.COM with a subject line of "Karma To Burn". Include your first and last name. Two winnders will be selected at random and contacted, one will win a pair of tickets while the other will win the tickets and the CD.