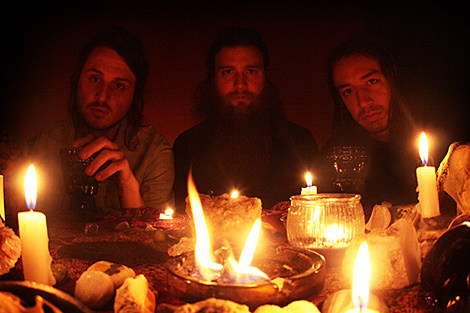 The name "Naam" doesn't denote a typist with a particularly itchy left pinky, but a Brooklyn based psychedelic trio that is prepping their self-titled debut for release on 10/20.

Since the release of their Kingdom EP, Naam has gigged quite a bit around our fair city, logging dates with Nebula, Cable, Violent Bullshit, and many others. Don't let that diverse list confuse you though! Much like their Tee Pee Records compatriots or like-minded hallucinogen explorers in The Black Angels or Black Mountain, the band plays a grim electric blues that recalls a more spacey Black Sabbath. The band isn't afraid to explore different territory though, as Naam even briefly visits black metal blast beats for the album closer "Black Ice". Versions of "Skyling Slip" and "Kingdom" (above), can be found on that LP as well as the Kingdom EP, though only "Skyling Slip" above comes from the new joint (double-entendre).

Naam has a few dates laid out in the coming months including supporting Om/Six Organs of Admittance at Europa on 10/11 (tix), the official Tee Pee CMJ showcase at Union Pool on Oct 23rd with Nebula, Quest For Fire, Weird Owl and more, as well as another curious bill on 9/10 at the Charleston that features a "special guest" headliner. The band can't officially be announced, but I do have a riddle... see if you can figure it out!

What bong-totin' riff-smokin' cross-eyed Southern Lord sons o' bitches happen to have a night off on September 10th? 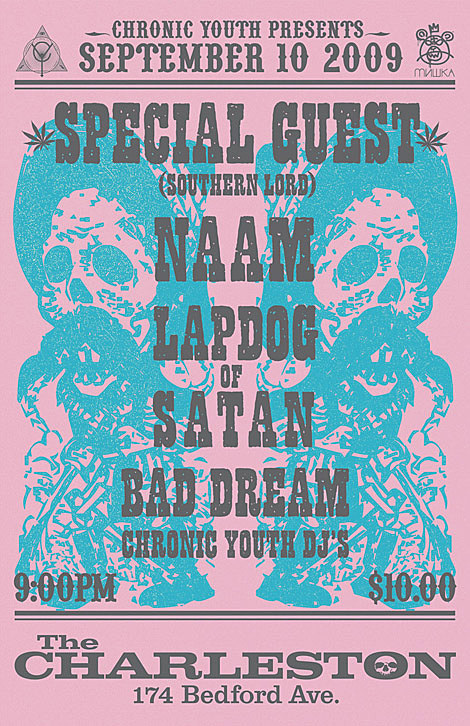