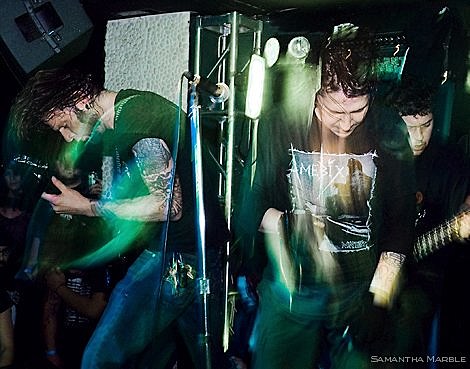 Saturday (6/12) marks the massive Eyehategod / Brutal Truth / Nachtmystium / Black Anvil / Tombs show at Europa. The uber-stacked bill still has tickets available but if you are lucky, you can win one of FOUR sets for free! Details on how to win are at the bottom of this post.

Of all of the above touring bands, only Nachtmystium have a freshly minted album under their wings (Black Anvil's Triumvirate impacts on 9/28). The followup to the critical/fan smash Assassins: Black Meddle, the highly controversial LP Addicts: Black Meddle Part II, is out now via Century Media. Check out a few tracks from that LP available for download above.

In an recent interview that I did for Metalsucks, Blake Judd of Nachtmystium revealed that the Twilight project (featuring Aaron Turner of Isis, Sanford Parker of Minsk, N. Imperial of Kreig, Wrest of Leviathan, and Stavros Giannopolous of The Atlas Moth) was working on new material and might have a new member:

There are talks that somebody from Sonic Youth might be playing with us as well. Sanford's [Parker] partner is Jeremy Lemos. He's Sonic Youth's sound technician live. So we're pretty closely connected to them through him. Thurston Moore is a big black metal fan, so we've been in talks with him about getting him involved and doing something on the next record, which we're all really hoping will happen.

We'll see if that formulates. In the meantime, Nachmystium fans can nerd out by picking up the "White Powder not White Power" shirt via Shirts & Destroy (designed by Autarch of Lightning Swords Of Death).

Some videos and contest details are below...

To win Eyehategod tickets, email bvcontests@hotmail.com with the subject line of "EHG". Include your first and last namel in the email. Four winners will be notified and awarded a pair of tickets each, with their names put on the list.