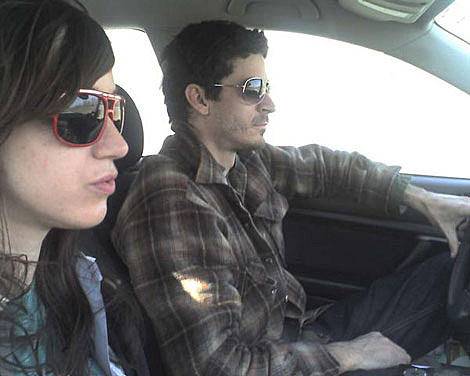 At Le Poisson Rouge on Friday evening, Holly Miranda played with a guitarist, Tim Mislock, though she'd do just as well alone. She's got a furious voice that she largely keeps in check, on her dry, spooky, inward-turned rock songs. After a small Internet firestorm early this year, she's signed with XL Records, though she's no more polished for it. During this show, her fangs were intact.

At other recent shows, Ms. Miranda has played with a fuller band (say, a violinist, a bass player and a drummer). That configuration gave her even more punch. Here, joined only by Mr. Mislock, it wasn't quite enough of a boost, though at the end of the set, when Mr. Mislock put down his guitar and fell into a lovely vocal harmony with Ms. Miranda, they seemed like a strong team. [NY Times]

Holly Miranda's only other CMJ show was the BrooklynVegan day party on Thursday at Pianos. Her next NYC show is tonight (10/27) at Bowery Ballroom, and speaking of her playing with a fuller band, she'll be backed at the show by Nada Surf. She goes on at 9, before show headliner Florence and the Machine. It is sold out.

A video of Holly performing recently in Brussels below...