DOWNLOAD: Dale Earnhardt Jr. Jr. - Nothing But Our Love (MP3) 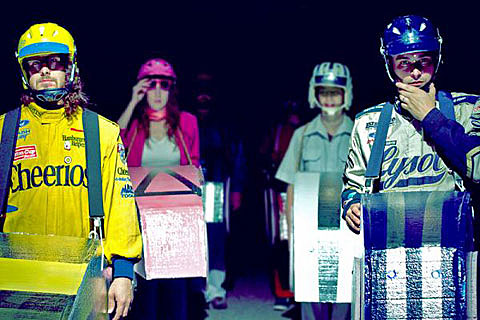 Nada Surf are one of the bigger (more popular) artists playing CMJ this year, and their sole official show is a headlining slot in a venue too small for them as part of showcase for their booking agent. Good thing for those that can't get in, there are more chances to see the band this week (at least one anyway).

The first of those chances happens Monday night, October 18th, at Rebel where Nada Surf will headline Syndicate's annual pre-CMJ 'Conflict of Interest' party. It is FREE with RSVP. Reggie Watts, Dale Earnhardt Jr. Jr., Bo Burnham, Oh Land and Kitten are also on the bill (Dale play the Mercury Lounge show with Nada Surf too).

Technically there are no more chances after that to see Nada Surf, but there's a rumor that they're also playing a TBA SPIN show, but not the same SPIN show Titus Andronicus is rumored to be playing.

Back to Dale: Dale Earnhardt Jr. Jr. (I wasn't a fan of their name, but it's growing on me) are actually playing at least seven times during CMJ. In addition to the two mentioned above, they're playing the previously mentioned Stereogum/PopGun show, a show at Cake Shop, a show at Bruar Falls, a show at The Studio with Jaill, and the BrooklynVegan day party happening at Public Assembly on Saturday, October 23rd (set time and more details TBA). Stream some of their sweet tunes at MySpace, grab their DayTrotter sesssion, and get a free track at their Facebook..

Dale Earnhardt Jr. Jr. - Nothing But Our Love