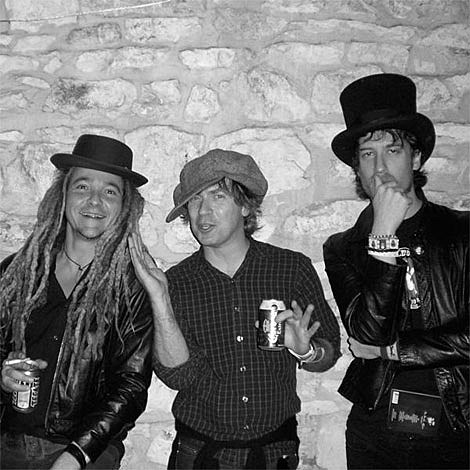 "Hope you've all had a great [2009]. Besides playing shows in France, Switzerland, Japan and NYC/NJ, things might have seemed quiet on the Nada Surf front, but I'm happy to tell you that the band are finishing up a covers album and we'll be making a full on announcement of the release (and tour) in early 2010. The one thing we can tell you is that it will include a version of the Depeche Mode song 'Enjoy the Silence' and for your listening pleasure, we've put a home demo Matthew recorded on our myspace site.

Those dates are now announced. Nada Surf will tour throughout North America and Europe in March, April & May. It all kicks off with three very special NYC shows....

There's a presale for most dates also starting Wednesday. All dates, and more info on the covers record, below...

ABOUT THE COVERS RECORD

Nada Surf bring their trademark sense of harmony and musical craftsmanship to 12 of their favorite songs with their latest release, if i had a hi-fi, their first album of covers. Only a group with their wide-ranging and eclectic taste could bring songs from such artists as Kate Bush, Dwight Twilley and the Go-Betweens together into a coherent, intelligent record. hi-fi also includes some intriguingly obscure numbers like Spanish band Mecromina's "Evolution" and Bill Fox's power-pop "Electrocution."

Although a great deal of thought went into the song selections, the band's intent is not to make an overarching musical statement. Singer-guitarist Matthew Caws says, "We really just wanted to do it organically, whatever we felt like covering in the moment, rather than trying to sum up our influences or something. It's whatever we were excited about in the months before making it. And I think we got to everything we wanted to." The result is both inspired and casual, like a conversation with a friend who shares your taste but also pushes your musical boundaries. A vintage Moody Blues tune, the proto-prog tempo-shifting "Question," shares space with The Soft Pack's blissfully rudimentary "Bright Side," Depeche Mode's grand "Enjoy the Silence," and experimental music icon Arthur Russell's terse but sweet "Janine."

Although the band had just returned from a worldwide tour in support of their 2008 release Lucky, and had looked forward to some time off, if i had a hi-fi mysteriously reenergized them. "The material came together spontaneously," says Caws. "We'd get together and kick ideas around and soon we had an A list, a B list, a C list.... ." They're particularly proud of the title, which is both a callback to the musical platform of their youth and a palindrome.

if i had a hi-fi was recorded over three weeks in September at Resonate Studios in Austin, TX with long-time collaborator and part-time keyboardist Louie Lino. Fans who attend shows during the spring tour will be able to get their hands on the record before it's in stores, offering true believers the opportunity for a double-first: hearing the songs for the first time and being able to take them home.