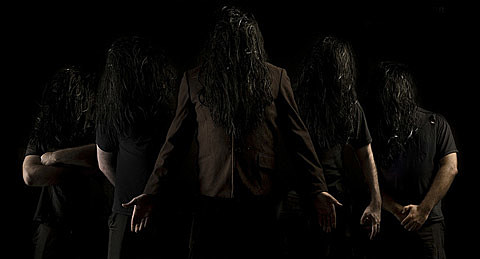 In a somewhat improbable move, Nader Sadek has assembled some of the key players from his In The Flesh LP for a live show of the entire album at Santos Party House in NYC on November 20th. Enlisting the help of Steve Tucker (ex-Morbid Angel), Rune Eriksen (Ava Inferi, Aura Noir, ex-Mayhem), Flo Mounier (Cryptopsy), Novy (ex-Vader / ex-Behemoth), Sean Frey, and "a surprise female vocalist", the FREE show will more than likely be the only "In The Living Flesh" event, and will feature visual art in addition to the live performance. Expect some fucked up shit...

With stage design that resembles a Wagnerian Opera, Nader Sadek seeks to take the death metal experience to new heights, as he is set to perform the new album "In The Flesh" live in its entirety alongside the production team behind the album. Upon entering the space, The Audience is invited to view all of Sadek's works on and off the stage, each attendee will be given "pamphlet" describing the evenings 3 acts. People can expect more than several props which are recognizable from Sadek's recent videos, such as glowing sulfuric crystals, caves, thrones, and a "elaborate setup for the drums." The show will feature a lengthy overture by a masked surprise female vocalist performing inside a mirrored cube, guitarists enveloped by a web of vines and more. Part Opera, Part Art installation. And All Metal. Conceptually, the theme behind the album, will manifest itself in the live setting, petroleum, man's greatest discovery and tragedy will embrace the composition of the visual and aural assault. This is a minimal description of what is to ensue on stage during the live slaughter of IN THE LIVING FLESH, which will finally bring Sadek's concept behind his new album to life. The performance will also be filmed live.

Check out some Nader Sadek videos with more info below, including "Nigredo in Necromance" which made its debut at BrooklynVegan more than a year ago, for an idea of what you're up against. 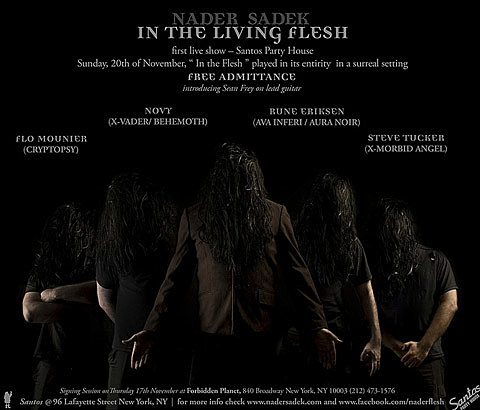 NADER SADEK - SULFFER ( In the Flesh )